European leaders, the United Nations and international groups have condemned US President Donald Trump’s measures against refugees and travellers from several Muslim-majority countries.

The chorus of criticism came as passport holders from Arab countries were blocked on Saturday from passing through customs at US airports and others were prevented from boarding US-bound planes.

Trump on Friday signed an executive order that will curb immigration and the entry of refugees from some Muslim-majority countries. He separately said he wanted the US to give priority to Syrian Christians fleeing the civil war there.

‘Part of our duties’

“The reception of refugees fleeing the war, fleeing oppression, is part of our duties,”  Jean-Marc Ayrault, France’s foreign minister, said during  a joint news conference with his German counterpart, Sigmar Gabriel.

Germany has taken in more than one million refugees and migrants, mainly from the Middle East, since 2015.

Although traditionally open to asylum seekers, France has taken in far fewer refugees than Germany since the migrant crisis erupted.

Some in the French government, particularly ex-premier Manuel Valls, have criticised Berlin’s open-door policy, as has Trump.

“The United States is a country where Christian traditions have an important meaning. Loving your neighbour is a major Christian value, and that includes helping people,” said Germany’s Gabriel.

Turkish Prime Minister Binali Yildirim also said the Republicans’ sweeping ban on people seeking refuge in the US is no solution to problems.

“Regional issues cannot be solved by closing the doors on people,” Yildirim said during a joint news conference in Ankara with Britain’s Prime Minister Theresa May, adding that Western countries should do more to help ease Turkey’s refugee burden.

May, however, refused to condemn Trump’s refugee suspension.

But other European leaders made their concerns clear, with Luxembourg Foreign Minister Jean Asselborn condemning the new measures.

“The decision is … bad for Europe, because it’s going to strengthen even further the mistrust and hatred towards the West in the heart of the Muslim world,” he told the Sunday edition of German daily Tagesspiegel, excerpts of which were released a day in advance.

Inside the US, Democrats were also quick to condemn Trump’s order, saying it would tarnish the reputation of the country.

There are tears running down the cheeks of the Statue of Liberty tonight. pic.twitter.com/X6q40dMCsN

Yet some Republicans praised Trump’s move. Bob Goodlatte, chairman of the House of Representatives Judiciary Committee, said the US president “is using the tools granted to him by Congress and the power granted by the Constitution to help keep America safe and ensure we know who is entering the United States”.

“What we have to remember in all of this is that there are millions of Americans who like what Trump is doing when he’s revamping immigration and the visiting to the US,” Al Jazeera’s Kimberly Halkett, reporting from Washington DC, said.

“It’s what he promised to do during the campaign trail and in his inauguration speech.”

‘Not time for walls’

Trump on Wednesday also ordered the construction of a US-Mexican border wall, a major promise during his election campaign, as part of a package of measures to curb undocumented immigration.

Ostensibly referring to Trump’s executive order, Iranian President Hassan Rouhani said in a speech on Saturday: “Today is not the time to erect walls between nations. They have forgotten that the Berlin wall fell years ago.”

He added: “Today is the time for peaceful co-existence, not the time to create distance among nations.”

But Milos Zeman,  the president of the Czech Republic, praised the decision. Writing on Twitter, Zeman’s spokesperson said Trump “protects his country” and called for the European Union to take similar measures.

Dutch politician Geert Wilders, known for promoting Islamophobia, tweeted: “Well done @POTUS it’s the only way to stay safe + free. I would do the same. Hope you’ll add more Islamic countries like Saudi Arabia soon,” using an acronym for the President of the United States. 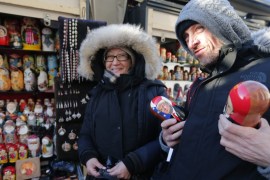 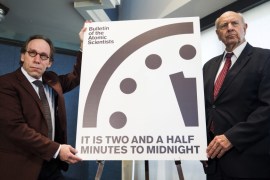