Atomic scientists say the world is inching closer to an apocalypse, partly due to the words and actions of US President Donald Trump.

The Bulletin of the Atomic Scientists, a group of nuclear scientists who have been assessing global security for 70 years, said they were moving their symbolic Doomsday Clock 30 seconds closer to midnight for a number of reasons, but cited Trump’s campaign rhetoric on nuclear proliferation and denial of climate change in particular.

“Even though he has just now taken office, the president’s intemperate statements, lack of openness to expert advice and questionable cabinet nominations have already made a bad international security situation worse,” the scientists said.

Trump, who assumed office on January 20, has made contradictory statements about climate change, at times calling it a hoax and other times saying he would keep an open mind about it.

Beyond the election of Trump, the scientists listed a number of other reasons for their assessment, including strains in relations between the US and Russia, which together possess more than 90 percent of the world’s nuclear weapons, and North Korea’s underground nuclear tests.

“The Doomsday Clock is closer to midnight than it has ever been in the lifetime of almost everyone in this room,” Lawrence Krauss, the chairman of the Bulletin’s board of sponsors, told reporters on Thursday.

“The last time it was closer was 63 years ago in 1953 after the then Soviet Union exploded its first hydrogen bomb, creating the modern arms race,” he added.

Alluding to Trump and Russian President Vladimir Putin, he said: “This is the first time that the words and stated policies of one or two people placed in high positions have so impacted on our perception of the existential threats we believe the world faces.”

In a lengthy 18-page explanation of its decision, the scientists said that the international community failed to “come effectively to grips” with both nuclear weapons and climate change last year.

The Doomsday Clock was created in 1947 by a group of scientists who worked on the Manhattan Project, the American-led clandestine effort to build the world’s first nuclear weapons.

Over the decades the scientists have recognised climate change as an additional threat, and in their report said “it could change life on Earth as we know it”.

Last year, the bulletin opted not to change the clock’s time from three minutes to midnight. 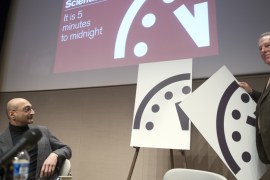 Experts who assess possibility of apocalypse on symbolic clock say world is as close to doomsday as last year.