At least five soldiers have been killed by unknown gunmen in Egypt’s Sinai Peninsula, according to military officials, in the latest attack to hit the troubled area.

“The armed forces mourn with great sadness and sorrow the five martyrs who were martyred in Sinai at the hands of disloyal fundamentalist elements, enemies of the nation and religion,” the military said in a statement on Monday.

The statement did not give any further details about the location or the circumstances surrounding the incident, but online media reports said the attack happened late on Sunday.

There was no immediate claim of responsibility for the deadly incident.

An armed movement in the rugged and thinly populated Sinai Peninsula has gained pace since the military toppled President Mohamed Morsi, of the Muslim Brotherhood, in mid-2013.

Since then, hundreds of police officers and soldiers have been killed in attacks.

Earlier in January, a truck-bomb attack on a checkpoint killed at least seven police officers in the city of El-Arish in northern Sinai.

In November, a car-bomb attack on a checkpoint in Sinai killed eight soldiers.

The Islamic State of Iraq and the Levant (ISIL, also known as ISIS) group’s Egyptian branch in the Sinai Peninsula has also carried out several such attacks over the past two years. 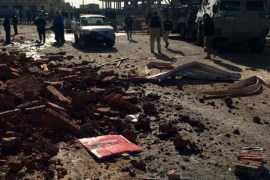 No immediate claim of responsibility for incident in El-Arish that has left at least seven security officers dead. 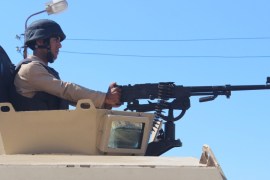 At least 13 troops dead after mortar attack claimed by ISIL on security checkpoint near city of El Arish.