A bomb blast ripped through a vegetable market in Pakistan’s northwestern region in a predominantly Shia area, killing at least 22 people and wounding about 90 others.

The explosion occurred on Saturday morning at the Eidgah Market in Parachinar city, the capital of Kurram Agency, where a large number of people had gathered to buy fresh produce.

Ashiq Hussain, who was lightly wounded, was being treated in Parachinar hospital. He said he was among the people buying fruit and vegetables loaded on a van when the explosion took place.

“There was a big bang and I saw a dark cloud of smoke and dust before passing out,” he said.

Hussain said he saw bleeding bodies and severed limbs and heard cries when he came back to his senses. “I was just bleeding from my leg,” he said. “Thank God I am alive.”

Local official Kurram Ikramullah told Al Jazeera that as many as 87 people had been wounded, some in critical condition.

“The bomb seems to have been planted in vegetable crate,” Ikramullah said. “There is a high possibility that the vegetables were brought from outside the agency.”

Lashkar-e-Jhangvi, a banned armed group that has attacked minority Shia Muslims in the past, claimed responsibility for the attack.

“That was our combined work with Shahryar group of Mahsud Taliban,” Ali Sufyan, a spokesman for the group, wrote in a text message to an Associated Press news agency reporter.

“It must be remembered that Parachinar has been, over the past few years, the scene of heavy sectarian violence between Shia and Sunni Muslim,” he said. “The explosion has caused heavy civilian casualties and the death toll is expected to rise.”

The Pakistani military media wing, Inter-Services Public Relations, said in a statement that some of the wounded would be airlifted to hospitals in Peshawar, capital of northwestern Khyber Pakhtunkhwa province.

Kurram has been the scene of increased attacks in recent years and the army has carried out a major operation against fighters in the region.

Pakistan has battled armed groups since 2004, a campaign that has claimed the lives of tens of thousands of civilians and security forces.

Last year, the country recorded its lowest number of killings since 2007 when the Pakistani Taliban was formed.

But remnants of armed groups are still able to carry out periodic bloody attacks.

“Terrorists largely eliminated by our security forces and the remaining will soon meet their fate if we all together rise against them,” Iqbal Zafar Jhagra, the provincial governor, told local Geo television. 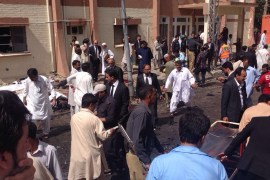 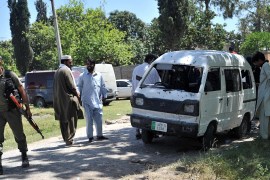 Blasts kill at least one policeman and wound dozens more in Peshawar.