Emergency teams have struggled to rescue a group of trapped firefighters who were inside a high-rise building when it collapsed in the Iranian capital, Tehran.

Iranian officials said on Friday that 25 people were still unaccounted for after the collapse of a 17-storey commercial building in Tehran on Thursday, in addition to 20 firefighters who were killed in the disaster, state TV reported.

“Police have received missing reports of 25 people. We urge people to report if any of their family members that worked in the Plasco building is missing,” a police official told the broadcaster.

Firefighters, soldiers, and sniffer dogs worked throughout the night on Thursday.

“The relief work is very hard. Removal of debris is going on in all parts of the building, but the thick smoke rising … is creating serious problems. It is still not clear how many people are trapped under the rubble, and not even one person has been pulled out.”

The official IRNA news agency said one firefighter, who made it out of the building before it fell, died in a hospital from severe burns.

Some 84 people were injured in the fire, five of whom were still in hospital.

Each layer of wreckage removed from the scene was unleashing fresh smoke, causing problems for workers and sniffer dogs.

“The removal of debris is more difficult than removing debris from a major earthquake because we are dealing with fire, smoke and lack of oxygen,” said Red Crescent official Morteza Moradipour.

The building, which was Iran’s oldest high-rise and contained a shopping centre and hundreds of clothing suppliers, came down on Thursday after a four-hour blaze.

Iranians were in shock over the apparent loss of so many firefighters, with state television placing a black banner across the corner of the screen as a sign of mourning. 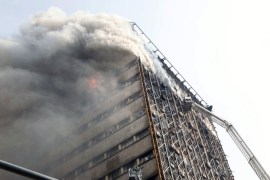