The Gambia’s opposition says long-time ruler Yahya Jammeh could be considered a rebel leader, if he takes up arms and does not step down later this month, a warning issued after the president vowed any foreign troop presence would be tantamount to an act of war.

Halifa Sallah, the spokesman of the opposition coalition, said on Monday that Jammeh will be a private citizen as of January 19 and would have no constitutional mandate to be in command of the armed forces of The Gambia.

The president of ECOWAS, the Economic Community of West African States, has said West African leaders will send troops into the country if Jammeh refuses to step down after losing the December 1 election.

“Any president, whose term of office expires, who takes up arms against an incoming president whose term should begin according to law, would be regarded by the international community as a rebel leader,” Sallah said, reading a statement by the coalition.

Jammeh railed against the West African regional bloc, ECOWAS, that has urged him to step down. He claims numerous voting irregularities invalidate the December 1 ballot won by the opposition coalition’s Adama Barrow. Jammeh’s party is challenging the results in court.

Meanwhile, Barrow says he is planning a January 19 inauguration, which puts him on a collision course with Jammeh, who seized power in a bloodless 1994 military coup.

Barrow, ECOWAS, the African Union and United Nations have carefully calculated their steps, Sallah said, adding Jammeh should do the same “so that no mistakes would be made that would undermine the peace and security of the country”.

ECOWAS, the AU and the UN, however, would not need to manage Gambian affairs if the constitution is followed and a peaceful transition is made, Barrow has said, urging Jammeh to open up a channel of communication, according to the coalition statement.

The Jammeh regime has long been accused of imprisoning, torturing and killing its opponents. 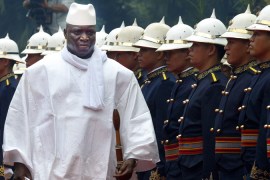 President says military remains loyal amid reports of arrests and interrogations over attack on presidential palace.