A minivan and a pick-up truck both packed with passengers have collided in eastern Thailand, killing 25 people.

Police said the minivan driver lost control after making a U-turn and ploughed into oncoming traffic in the eastern province of Chonburi on Monday. Both vehicles burst into flames.

“The victims were killed by fire or the impact,” police Lieutenant-Colonel Wiroj Jamjamras at Ban Bueng provincial police station told AFP news agency, adding two toddlers were among the dead.

Wiroj said 15 people were inside the minivan while 12 passengers were packed into the pick-up truck – all of them Thai nationals.

Two passengers were injured, but are expected to survive, he said. Wiroj ruled out drink-driving as the cause of the accident.

Despite relatively good infrastructure, Thailand has the world’s second most dangerous roads in terms of per capita deaths, according to data collected by the World Health Organization in a 2015 report.

Fatalities tend to rise in the New Year week and during Songkran, a religious festival in April, when millions of low-paid workers return to the countryside from their city jobs to see family.

Both weeks are dubbed the “Seven Deadly Days” in Thai media, with the government keeping a daily death tally during those two periods to try to encourage better road safety.

As of Sunday – the fourth day of the country’s New Year holiday week – 280 people had died on Thailand’s roads, a 10 percent increase from last year.

About 43 percent of the recorded road accidents involved drink-driving and 82 percent involved motorcycles. 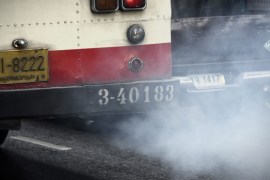 Bangkok cleans up its act