At least 30 inmates were killed in a prison riot in Brazil’s northeastern region that broke out late on Saturday, a person with direct knowledge of the situation said.

The person, who requested anonymity because forensic work is under way, said the number of casualties could rise.

About a dozen inmates in the Alcacuz prison located in the state of Rio Grande do Norte have been taken to nearby hospitals, the person said.

The riot began around 5pm local time (17:00 GMT) in Alcacuz, and continued until 7am (09:00 GMT), when police officers took control of the prison.

Officials said they waited until dawn before entering the prisons after they gained control of the situation.

President Michel Temer said on Twitter that he had been following the situation.

Alcacuz, like many of the country’s prisons, is overcrowded. The prison holds 1,000 inmates in a facility built for just prisoners.

Violence is common in overcrowded prisons and 40 percent of inmates have yet to be sentenced.

The outbreak of violence at Brazil’s prisons began January 1, when 56 inmates were killed in the northern state of Amazonas.

That riot, which lasted for 17 hours in the Anisio Jobim Penitentiary Complex in Manaus, the capital of Amazonas state, saw bodies butchered, decapitated and burned after clashes between rival drug gangs. 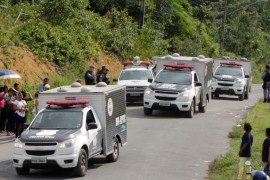 Bodies butchered, decapitated and burned after clashes between rival drug gangs at a prison complex in Amazonas state. 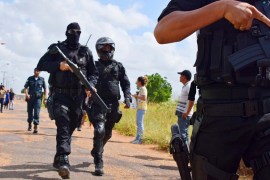 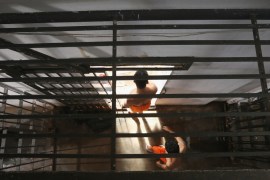 Deaths as riot breaks out in Brazil prison

At least seven people die and 70 others are held hostage overnight after riot breaks out during prison visiting hours.