Recent cold weather in the Ayacucho region of south-central Peru is being blamed for the deaths of up to 180,000 alpacas.

These usually hardy animals appear to have been made vulnerable to the cold weather by a series of ongoing environmental factors.

Much of the region has been experiencing drought conditions since August last year. Lack of water in lagoons had a direct effect on the alpacas’ breeding season.

Lack of rainfall also resulted in stunted grass growth, so the animals have endured poor grazing for several months, weakening them further.

Large numbers of deaths of alpacas, and the other South American camelids – llamas, vicunas and guanacos – are not unknown.

Outbreaks of extremely cold air from the Antarctic, known as friagens, occur during the winter months. The friagen of 2003 killed more than half of all the country’s alpacas when temperatures plunged to minus 35 Celsius. Last winter’s cold weather reportedly killed 50,000 alpacas in the southern Puno region.

The fact that these deaths have occurred in the summer months do make it very unusual, but alpacas are not quite as tough as people often think.

They are not particularly good at foraging in cold or snowy weather. They also do not carry much body fat and their coats contain no water-resistant lanolin.

In recent days, there have been reports of heavy rain in the region. It may be that the animals’ coats have been penetrated by water, making them vulnerable to the combination of low temperatures and strong winds.

Alpaca wool is a major export in Peru. More than $150m of fleeces are sent abroad each year. 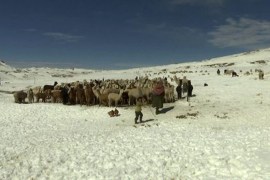 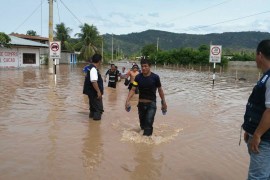 Heavy downpours around the western Amazon force hundreds of people from their homes as rivers burst their banks.