Top intelligence officials last week told President-elect Donald Trump about an unsubstantiated report that Russia had compromising personal and financial information about him, a US official said.

The official, who was not allowed to publicly discuss the matter, spoke to media on the condition of anonymity. The briefing about the document was first reported by CNN on Tuesday.

Shortly after news reports were published about the briefing, Trump took to Twitter to deny the veracity of the claims.

The document was separate from a classified assessment of Russia’s attempts to meddle in the US presidential election.

The unverified dossier on Trump was compiled by a former western intelligence operative as part of an opposition research project originally financed by a Republican client who opposed Trump, and later funded by Democrats, according to Mother Jones, which published an article about the report in October and said the operative had turned over the report to the FBI.

READ MORE: Trump says he knows ‘a lot about hacking’

It is unclear why the intelligence officials decided to brief the president and Trump on the uncorroborated information at this time, but politicians and others have repeatedly noted that Russia collects intelligence on both Democrats and Republicans.

“The Russians also hacked systems associated with the Republicans. They just chose not to release that material yet,” Senator Mark Warner of Virginia, the ranking Democrat on the Senate intelligence committee, said on Tuesday.

“There’s nothing that prevents them from doing so at a time of their choosing in the future.”

The report had been circulating in Washington for months. In October, former Senate Minority Leader Harry Reid wrote to the FBI asking the bureau to publicly disclose what it knew about the Trump campaign’s ties to Russia.

Reid was aware of the dossier before he wrote the letter, according to a person knowledgeable about the subject who spoke on condition of anonymity because they were not authorised to speak publicly about the matter.

FBI Director James Comey refused earlier on Tuesday to say whether the FBI was investigating any possible ties between Russia and Trump’s presidential campaign, citing policy not to comment on what the FBI might or might not be doing.

Comey was pressed by Democrats on the committee about whether the FBI was conducting an investigation. There was no mention during the hearing about the summary of the dossier, which was attached to the classified hacking assessment.

“I would never comment on investigations – whether we have one or not – in an open forum like this, so I can’t answer one way or another,” Comey told the panel during his first public appearance before Congress since the election.

In late October, Comey angered Democrats when he announced 11 days before the election that the FBI was looking at more emails as part of its investigation of Hillary Clinton.

Oregon Democratic Senator Ron Wyden said the American people had a right to know about whether there is an FBI investigation into the Trump campaign’s ties with Russia.

An active FBI investigation of the next president for ties between his campaign and a nation accused of meddling in the presidential election could further stoke mistrust in the legitimacy of the democratic process. 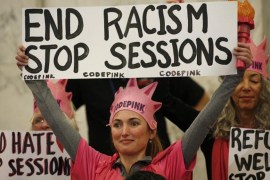