Syrian rebels have rejected a provincial governor’s claim that a deal has been reached for government forces to enter a rebel-held area near Damascus and restore the capital’s water supply.

Ahmed Ramadan, an official with the opposition National Coalition, denied any such deal had been reached.

“This information is untrue and is a part of the [regime and its allies’] psychological warfare,” he told AFP.

Yet, a source inside the Wadi Barada region told AFP that several hundred civilians were leaving under an agreement.

The reported deal comes after weeks of fighting in the region, 15 kilometres northwest of Damascus, which has threatened a fragile truce in place since December 30.

Alaa Ibrahim, the provincial governor of Damascus, had earlier on Wednesday told SANA that there was now a deal to allow the government to retake control of the region.

“The agreement that was reached in principle requires the militants to give up their heavy weapons and for non-local militants to leave the area of Wadi Barada,” he said.

“[Then] the Syrian Arab Army will enter the area to clear it of mines and bombs to prepare for the entry of maintenance teams … to fix the damage caused to the water pumps and pipes by the terrorists’ attacks.”

The Syrian Observatory for Human Rights, a British-based monitor of the war, said the government had not reached a comprehensive deal with rebels.

But it reported that residents wishing to leave were being offered safe passage on an individual basis.

And a source on the ground in Wadi Barada said on Wednesday that some 600 civilians had left, passing through a makeshift tent where government officials were checking documents.

SANA reported that some 500 people had left the area, among them some 60 rebels.

But the rebels say government strikes damaged pumping facilities and deny that Fateh al-Sham, previously known as al-Nusra Front, has forces in the area.

The government has concluded dozens of so-called “reconciliation deals” with rebel-held areas in Syria in recent months, particularly around the capital.

The deals usually offer civilians and rebels safe passage to opposition-held territory elsewhere in exchange for surrendering the area to the army.

The opposition says it is forced into such deals by government sieges and assault, and terms them a “starve or surrender” tactic.

The UN warned that sabotaging water supplies is a war crime after the water to Wadi Barada was cut.

Jan Egeland, the head of a UN-backed humanitarian task force for Syria, said last week that the shutdown already had “dramatic” consequences.

Syria’s conflict started as a largely unarmed uprising against President Bashar al-Assad’s rule in March 2011, but it has since morphed into a full-scale civil war that has killed hundreds of thousands and displaced more than half of the country’s prewar population.

Fighting has continued in Wadi Barada despite the start of a truce brokered by government ally Russia and rebel backer Turkey in late December.

The ceasefire is intended to pave the way for new peace talks in the Kazakh capital Astana, which Russia confirmed on Wednesday were scheduled for January 23.

On Wednesday, the Syrian Observatory reported government air strikes in several parts of the Eastern Ghouta region outside Damascus that killed one person and wounded nine.

And overnight it said air strikes hit rebel-held parts of Aleppo and Idlib province in the north and northwest of the country, killing at least three rebels. 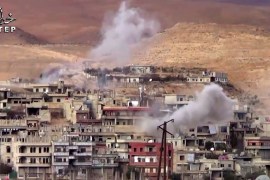 Syrian forces battle rebels for Wadi Barada valley where damaged infrastructure has cut off water to millions of people. 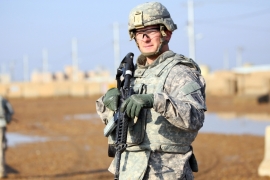