The US ambassador in Tel Aviv has angered Palestinians with a comment downplaying Israel’s 50-year occupation of the West Bank, the second such spat in a month.

In a video interview with Israeli news site Walla broadcast in full on Friday, ambassador David Friedman said the Jewish state is “only occupying two percent of the West Bank”.

“Israel is internationally recognised as the occupying power over 100 percent of Palestine, including in and around occupied East Jerusalem,” Erekat said.

He said Friedman’s latest comment was “not only false and misleading but contradicts international law, United Nations resolutions, and also the historical US position”.

“It is not the first time that Mr David Friedman has exploited his position as US ambassador to advocate and validate the Israeli government’s policies of occupation and annexation,” Erekat added.

Before becoming ambassador, Friedman was the president of American Friends of Bet El Institutions, an organisation that supports the settlement of the same name that is built on Ramallah lands.

Early in September, Friedman caused a stir when in an interview with the Jerusalem Post he referred to the “alleged occupation”.

Nabil Shaath, an aide to Palestinian Authority President Mahmoud Abbas, said Friedman’s comments are “very bad news for the future of any American attempt to make peace in the Middle East”.

Friedman is in “absolute ignorance of facts of law and of the position of the United States,” Shaath added.

The US State Department was quick to distance itself from its envoy.

“His comments … should not be read as a way to prejudge the outcome of any negotiation that the US would have with Israel and the Palestinians,” spokeswoman Heather Nauert told reporters in Washington on Thursday.

“It should not be read as a change in US policy.”

Israel occupied the West Bank in the Six-Day War of 1967 and later annexed east Jerusalem in a move never recognised by the international community.

READ MORE: Drowning in the waste of Israeli settlers

More than 600,000 Israelis now live in settlements in the territory that are regarded as illegal by most of the international community.

US President Donald Trump is seeking to restart frozen peace negotiations between Israel and the Palestinians.

Friedman said the president remained committed to a peace agreement but had not set any formal timeframe.

“I would expect [a deal] within months,” he said. “But we’re not going to limit ourselves to any hard deadline. We’re trying to get it done right, not done fast.” 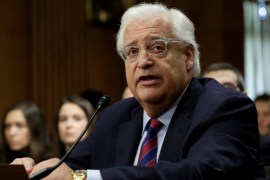 US ambassador to Israel: ‘Great advantage to Netanyahu’

David Friedman is known for his support for the most extreme elements in Israel’s settler movement. 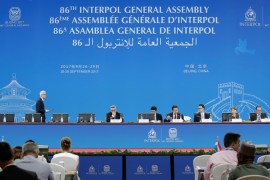 Secret ballot seen as diplomatic win for Palestinian statehood, as Israel was actively seeking to postpone the vote.