London’s transport authority says it will not renew Uber’s licence to operate in the British capital, arguing that it demonstrates a lack of corporate responsibility with implications for public safety and security.

Transport for London (TfL) says the ride-booking app was not “fit and proper to hold a private hire operator licence”.

It cited its approach to handling serious criminal offences and its use of software to block regulatory bodies from gaining full access to the app, preventing “officials from undertaking regulator or law enforcement duties”.

In London, Uber has faced criticism from unions, legislators and traditional black-cab drivers over working conditions.

London Mayor Sadiq Khan said he supported Friday’s decision, saying any operator of taxi services in the city “needs to play by the rules”.

He says that “providing an innovative service must not be at the expense of customer safety and security”.

Uber is not a good company.

But uber has also transformed London's cab service for the better.

This is a short-sighted decision from @TfL.

Uber said in response that it would challenge the decision.

TfL said Uber, whose licence expires on September 30, would be allowed to continue to operate while the appeals process was exhausted.

“Transport for London and the Mayor have caved in to a small number of people who want to restrict consumer choice,” Uber said in a statement. “We intend to immediately challenge this in the courts.”

Uber also said that if this decision stands, it will put 40,000 licensed drivers out of work and deprive Londoners of a convenient and affordable mode of transport.

Al Jazeera’s Nadim Baba, reporting from London, said that at first glance, TfL’s decision looks like bad news for both the company and for those 3.5 million people in London who use Uber.

However, the company, he said, has long struggled with an image problem.

“For example, there have been allegations that some of its drivers in the UK have committed sexual assault in varying degrees of seriousness,” our correspondent said.

“Beyond that, it’s about how it negotiates with its drivers, whether they are self-employed whether it actually gives them a guaranteed number of hours and a decent basic income.”

Unions are saying Uber is trying to get around the law, Al Jazeera’s Baba said. 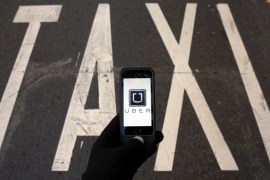 Kalanick taking time out to heal from mother’s death and giving company ‘room to embrace new chapter in Uber’s history’.