Leaders from the UK, US, France, Canada and Australia have urged Myanmar leader Aung San Suu Kyi to push for an end to violence against the Rohingya.

The comments come before a scheduled televised national address by Aung San Suu Kyi on Tuesday, in what the US has called a “defining moment” for Myanmar’s de facto leader.

Aung San Suu Kyi, a Nobel Peace Prize laureate, has come under increased criticism over the past month as more than 410,000 Rohingya have fled Myanmar to neighbouring Bangladesh, escaping what the UN has described as “ethnic cleansing”.

“What we are trying to get everyone to agree is that, number one, the killings have got to stop, and the violence has got to stop,” British Foreign Secretary Boris Johnson told Reuters news agency before hosting a ministerial meeting on the sidelines of the UN General Assembly to discuss ways to resolve the Rohingya crisis.

“And we look not just to the military but also to Daw Suu to show a lead on that,” he said.

The meeting included ministers from Canada, Denmark, Turkey, Australia, Indonesia, Sweden, Bangladesh, the US and a representative from the European Union.

In a statement afterwards, Johnson said that while Myanmar had “made encouraging progress towards democracy in the last few years, the situation in Rakhine, the terrible human rights abuses and violence are a stain on the country’s reputation”.

“It is vital that Aung San Suu Kyi and the civilian government make clear these abuses must stop,” he said.

The mostly Muslim minority is not recognised as an ethnic group in Myanmar, despite having lived there for generations.

Myanmar’s national security adviser, Thaung Tun, told Reuters after Monday’s meeting that his country will “make sure that everybody who left their home can return to their home, but this is a process we have to discuss”.

He added that Myanmar wants “to make sure that everybody who needs humanitarian assistance gets it, without discrimination. That is one thing we agreed on.”

Johnson said he was “encouraged by our discussion and by the participation of the senior Burmese [Myanmar] representatives, but we now need to see action to stop the violence and open up immediate humanitarian access”.

About a million Rohingya lived in Rakhine State until the recent violence. Most face restrictions on movement and are denied citizenship in a country where they have been persecuted for decades.

Australian Foreign Minister Julie Bishop told Reuters that she wanted to hear Aung San Suu Kyi offer a solution “to what is a tragedy of enormous proportions”.

She said that during the ministerial meeting in New York there “was unanimity in the view that the violence must end and that there be a ceasefire.

“And we emphasised the need for humanitarian support to get through and also that the Rohingya must be able to return home,” Bishop said.

While Aung San Suu Kyi does not have direct control of the military, she has been criticised for not speaking out against the plight of the Rohingya and for not doing more to stop the violence.

The United States urged the Myanmar government to end military operations in Rakhine State, grant humanitarian access, and commit to aiding the safe return of civilians to their homes, US Ambassador to the UN, Nikki Haley, said in a statement after the meeting.

“People are still at risk of being attacked or killed, humanitarian aid is not reaching the people who need it, and innocent civilians are still fleeing across the border to Bangladesh,” Haley said.

A spokesman for the Department of State said the US urges “the [Myanmar] government to act quickly to restore the rule of law, investigate alleged human rights abuses and violations, and to hold security forces and others responsible for abuses and violations fully accountable for their actions”.

US-Myanmar ties improved after the military began withdrawing from government in 2011 and paved the way for a 2015 election won by Aung San Suu Kyi’s party. But the military retains a strong hand in government and remains responsible for security.

Canadian Prime Minister Justin Trudeau called on Aung San Suu Kyi to “publicly condemn” the violence in Rakhine, adding that by doing so she “can help guide the people of Myanmar to surmount these deep ethnic divisions”.

Writing to Aung San Suu Kyi on Monday, Trudeau said that that it was “with profound surprise, disappointment and dismay that your fellow Canadians have witnessed your continuing silence in the face of the brutal oppression of Myanmar’s Rohingya Muslim people”.

Aung San Suu Kyi was given honorary Canadian citizenship in 2007.

“With so many influential leaders gathered in New York, the next step should be work on a UN General Assembly resolution condemning the abuses and a Security Council resolution to impose targeted sanctions and an arms embargo on the commanders leading this brutal campaign,” he said.

However, Myanmar earlier this month said it was negotiating with China and Russia, both permanent, veto-wielding, members of the Security Council, to block any bid to censure the country over the violence.

Her televised speech to the nation on Tuesday is expected at 03:30 GMT. 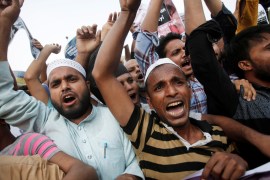 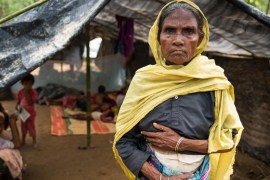