At least two children and one woman were killed in a stampede as clothes were being handed out to Rohingya refugees in Bangladesh, according to aid agencies.

The report came as hundreds of thousands of Rohingya flee deadly violence in Myanmar and arrive in neighbouring Bangladesh.

“Two children and one woman were killed in a stampede during an unauthorised clothing distribution on the road in Balukhali Pan Bazar area. Despite local regulations and the control room established, private distributions of relief items continue,” said a September 15 report by the Inter Sector Coordination Group (ISCG).

Meanwhile, though several well-meaning Bangladeshi citizens have offered their support to the Rohingya, the ISCG said at least six people from the local community who identified themselves as camp managers at another location had been charging refugees for land and shelter.

The perpetrators were arrested and jailed for 15 days, the report said.

ISCG, which comprises various humanitarian agencies, said 326,700 people in makeshift and spontaneous settlements in Bangladesh were in need of emergency shelter.

More than half of the estimated 412,000 Rohingya who have arrived in Bangladesh live in fragile conditions without proper shelter, clean drinking water and sanitation.

Al Jazeera reporters in Cox’s Bazar, the main city for arrivals, have witnessed long queues and struggles for aid.

Torrential rain there has made their plight even more challenging.

Several Rohingya refugees have told Al Jazeera that after arriving in Bangladesh, they have not received food, shelter or enough clean water.

At the end of August, Myanmar’s military launched a bloody crackdown on ethnic Rohingya – a mostly Muslim group often described as the world’s most persecuted minority – after an armed Rohingya group carried out attacks against the army.

Since the attacks by the Arakan Rohingya Salvation Army (ARSA), the army has killed more than 400 people and driven out hundreds of thousands from the western Rakhine state, creating one of the biggest refugee crises of recent times. 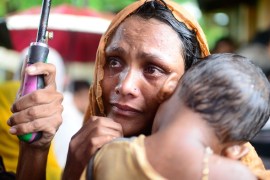 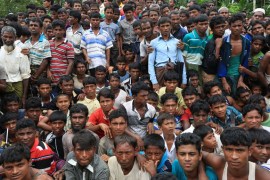 ‘We will kill you all’: Rohingya beg for safe passage

Thousands of Muslim-majority Rohingya encircled by hostile Buddhists in Rathedaung are pleading for a secure way out. 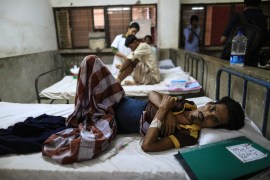