North Korean leader Kim Jong-un has vowed to complete his nuclear weapons programme in the face of strengthening sanctions after he inspected a powerful new intermediate-range missile that was fired over Japan, according to state news agency KCNA.

North Korea’s state media carried Kim’s comments on Saturday, a day after US and South Korean militaries detected the missile launch from the North Korean capital of Pyongyang.

KCNA said North Korea’s goal is reaching an “equilibrium” of military force with the United States and to “make the US rulers dare not talk about military option for the DPRK”.

Pyongyang had fired its second missile over Japan in less than a month on Friday, prompting the United States to say it has military options to deal with North Korea.

According to Japanese officials, a projectile was launched at 6:57am local time on Friday (21:57 GMT Thursday) and flew over the northern Japanese island of Hokkaido before falling into the Pacific Ocean – 2,000km east of Cape Erimo.

South Korea‘s defence ministry said the missile travelled about 3,700km and reached a maximum altitude of 770km – both higher and further than previous tests.

Get all the latest updates on the North Korea tensions

The US Pacific Command said Friday’s missile did not pose a threat to North America or to the US Pacific territory of Guam, which Pyongyang has threatened to bracket with “enveloping fire”.

Friday’s test brought about worldwide condemnation, with the UN Security Council calling it a “highly provocative” launch of a missile.

The council “strongly condemned these launches, condemned further DPRK for its outrageous actions, and demanded that the DPRK immediately cease all such actions”, according to a statement issued later on Friday.

The statement did not threaten any further sanctions.

The US reiterated on Friday that it had military options to deal with North Korea.

“We’ve been kicking the can down the road, and we’re out of road,” McMaster told reporters, referring to Pyongyang’s repeated missile tests in defiance of international pressure.

The US ambassador to the United Nations, Nikki Haley, echoed McMaster’s strong rhetoric, even as Washington continued to emphasise that its preferred resolution to the crisis is through diplomacy and sanctions.

North Korea has launched dozens of missiles under leader Kim Jong-un as it accelerates a weapons programme designed to give it the ability to target the United States with a powerful, nuclear-tipped missile.

US President Donald Trump said that he is “more confident than ever that our options in addressing this threat are both effective and overwhelming”.

He said that North Korea “has once again shown its utter contempt for its neighbours and for the entire world community”.

The Chinese ambassador to Washington said that the US should refrain from issuing threats over North Korea and should instead do more to resume dialogue and negotiation.

He added that China is prepared to implement the UN Security Council resolutions on North Korea, “no more, no less”.

Russia‘s UN ambassador, Vassily Nebenzia, said the United States needed to begin talks with North Korea, something that Washington has so far ruled out.

“We called on our US partners and others to implement political and diplomatic solutions that are provided for in the resolution,” Nebenzia told reporters after the Security Council meeting on Friday.

“Without implementing this, we also will consider it as a non-compliance with the resolution.”

Asked about the prospect of direct talks, a White House spokesman said: “As the president and his national security team have repeatedly said, now is not the time to talk to North Korea.”

South Korean President Moon Jae-in also said dialogue with the North was impossible at this point.

He ordered officials to analyse and prepare for possible new North Korean threats, including electromagnetic pulse and biochemical attacks. 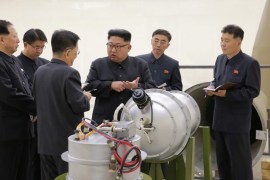 Warning comes as Trump calls latest sanctions only a ‘small step’ and ‘nothing compared’ to what will have to be done. 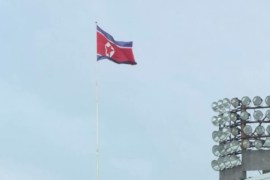 Pyongyang’s nuclear weapons programme is full steam ahead in the face of increasing US-led international sanctions.