The Arakan Rohingya Solidarity Army (ARSA), a small group of men fighting in Myanmar’s western region of Rakhine, have rejected accusations they have links with al-Qaeda, ISIL (also known as ISIS) or other armed groups; and warned foreign fighters against entering the troubled region.

In a statement released on Thursday, ARSA said it had “no links with al-Qaeda, the Islamic State of Iraq and the Levant (ISIS), Lashkar-e-Taiba or any other transnational terrorist group”.

In its statement, ARSA used ISIS to refer to the armed ISIL group.

It said it did not welcome the involvement of any of those entities in the conflict and called on countries in the region “to prevent terrorists from entering Arakan and making a bad situation worse”.

Arakan is another term for Rakhine, the western state of Myanmar where most of the country’s 800,000 Rohingya live.

The statement also said the group was concerned about the deteriorating humanitarian situation in Rakhine and called on aid groups and non-governmental organisations (NGOs) to visit the area and provide life-saving assistance to those that had been affected by the violence.

Speaking on the condition of anonymity, a Rohingya living in Rakhine’s embattled township of Buthidaung told Al Jazeera that it was unlikely that ARSA’s latest announcement would sway international support in favour of the Rohingya.

“For years the international community has known that there are no terrorist groups in Rakhine. Even though ARSA has distanced itself from such groups today, it’s clear, our neighbours and the world has no interest in coming to our defence.”

More than 370,000 Rohingya have fled from Rakhine to neighbouring Bangladesh after the military launched a counteroffensive following attacks by ARSA on 30 police posts and an army base last month.

READ MORE: Who are the Arakan Rohingya Salvation Army?

Witnesses told Al Jazeera that entire Rohingya villages had been burned to the ground since the start of the security forces’ operation, while Antonio Guterres, UN secretary-general, warned of the risk of ethnic cleansing, appealing to the country’s authorities to end violence against the majority-Muslim Rohingya in Rakhine.

The Myanmar army has put the death toll at around 400, saying most of those killed were fighters. Residents, however, say it is more than 3,000 people.

Despite facing decades of oppression, the predominantly Muslim Rohingya had largely refrained from violence.

“For over 75 years there have been various crimes and atrocities committed against the Rohingya … that’s why we carried out the October 9, 2016, attack – to send a message that if the violence is not stopped, we have the right to defend ourselves,” he said.

Maung Zarni, a non-resident fellow at the European Centre for the Study of Extremism, told Al Jazeera that the group’s actions were borne out of “systematic abuses of genocidal proportions” by the Myanmar military.

“They’re a group of hopeless men who decided to form some kind of self-defence group and protect their people who are living in conditions akin to a Nazi concentration camp,” he said.

“ARSA’s actions resemble Jewish inmates at Auschwitz who rose up against the Nazis in October 1944.”

An extensive report issued last December by the International Crisis Group said ARSA is “led by a committee of Rohingya emigres in Saudi Arabia and is commanded on the ground by Rohingya with international training and experience in modern guerrilla war tactics”.

It said the group did not appear to have “extremist motivations,” and enjoyed considerable sympathy and backing from Muslims in northern Rakhine state. 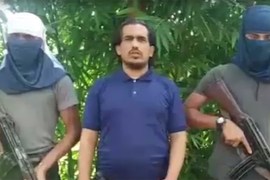