Correction11 Sep 2017
Since this article was published, the director of El Periodico de Cataluna has said the NCTC briefing note was not real and was a recreation built from information received from unspecified sources.

US security agencies warned Spain in May that the Islamic State of Iraq and the Levant (ISIL, also known as ISIS) group was planning an attack in Barcelona, where the group claimed a deadly van rampage earlier this month, local media reported.

The daily El Periodico de Cataluna reported that the US National Counterterrorism Center (NCTC) alerted Spanish intelligence officers to the threat weeks before a man ploughed his vehicle into crowds of tourists along Barcelona’s Las Ramblas boulevard on August 17, killing 14 people.

“Unsubstantiated information of unknown veracity from late May 2017 indicated that the [Islamic State of Iraq and the Levant] was planning to conduct unspecified terrorist attacks during the summer against crowded tourist sites in Barcelona, Spain, specifically [Las Ramblas] street,” according to an NCTC briefing note published by the paper.

ISIL claimed responsibility for the attack without naming those behind the assault.

A spokesman for Spain’s CNI intelligence agency, contacted by AFP news agency, refused to “confirm or deny anything on communication with other intelligence services”.

The interior ministry did not respond to a request for comment.

Spain is still recovering from the twin vehicle attacks in August that left a total of 16 people dead and more than 120 wounded in Barcelona and the seaside resort of Cambrils further south. 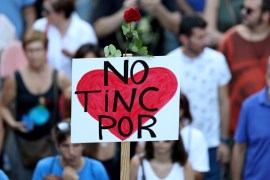 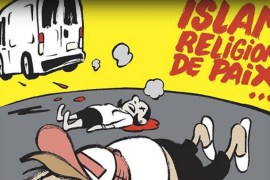 Reactions pour in over cover showing a van running over people with the caption: ‘Islam: religion of peace…eternal’.