A powerful earthquake that struck Mexico last week has left some 2.5 million people in need of aid and killed 96 others, authorities said on Monday, as officials rushed to get food and water to afflicted communities in the poor south.

Oaxaca state Governor Alejandro Murat told local television the death toll in his state had risen to 76. He said preliminary reports showed that at least 12,000 homes were damaged, and warned the number was likely to rise.

Murat said one million people in Oaxaca needed food, water, electricity and help to rebuild damaged homes; in neighbouring Chiapas state, which was closest to the epicentre of the temblor, 1.5 million people were affected, according to officials.

“We are united in facing this humanitarian crisis,” Murat said.

The defence and navy ministries organised an airlift to Oaxaca and Chiapas and were bringing in heavy machinery to remove rubble, presidency spokesman Eduardo Sanchez told Televisa network.

He acknowledged the distribution of food and shelter is complicated as both regions are mountainous and the worst-hit areas were “very difficult to reach”.

The 8.1-magnitude quake off the coast of Chiapas rattled Mexico City and sowed destruction across the narrowest portion of Mexico on the isthmus of Tehuantepec.

Sixteen people have been reported killed in Chiapas state and four in neighbouring Tabasco. Many of the fatalities in Oaxaca were in the town of Juchitan, where more than 5,000 homes were destroyed.

The quake, the most powerful earthquake to hit Mexico in more than eight decades, was stronger than a 1985 temblor that killed thousands in Mexico City. However, its greater depth and distance kept the capital from being more seriously damaged.

Pena Nieto’s spokesman said the president would supervise the delivery of food aid and blankets during his trip to the region, but did not specify where. 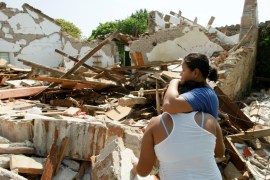 At least 90 people killed across the country as emergency workers still look for victims under the rubble. 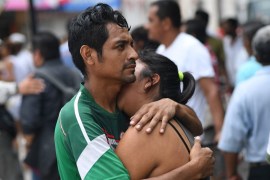