Saudi Arabia has affirmed its commitment to solving the crisis in war-torn Syria by backing a gradual process of negotiating local ceasefires and setting up “de-escalation zones”, Russia’s foreign minister said.

Sergey Lavrov made the comments at a joint news conference with the Jordanian Foreign Minister Ayman Safadi in Amman on Monday, a day after meeting with Saudi leaders in Jeddah.

An agreement by Russia, Turkey and Iran to set up so-called de-escalation zones in Syria was signed in May during talks in Kazakhstan’s capital, Astana. But the plan was sharply criticised by the Syrian opposition, who rejected Iran’s role as guarantor in any deal.

Lavrov said on Monday that Saudi Arabia had assured him it supports the agreement and “will cooperate in terms of creating de-escalation areas and other initiatives under the Astana process”.

A new round of talks aimed at ending Syria’s six-year conflict is set to get under way later this week in Astana.

UN-sponsored peace talks ended with “no breakthrough, no breakdown” in Geneva in July.

Local ceasefires have proven to be the most successful approach to mitigating multi-sided fighting in Syria, which has killed some 400,000 people and displaced half the country’s population since 2011, Lavrov said.

The Russian diplomat defended his country’s military support for Syrian President Bashar al-Assad, saying Russia – along with Iran and the Iran-backed Lebanese armed group Hezbollah – are there “based on a direct invitation from the legitimate Syrian authorities.”

The Syrian civil war, now in its seventh year, triggered a mass exodus of refugees, including hundreds of thousands of Syrians who found refuge in Jordan.

A ceasefire brokered by Russia, Jordan and the United States in the southern Syrian provinces of Daraa, Quneitra and Suweida has largely held since it came into force on July 9.

Both Safadi and Lavrov reiterated on Monday the ceasefire was “successful” and the next step would be to set up a safe zone in the area “as soon as possible”.

READ MORE: Letter from Aleppo – ‘Devastation was all I found’

Jordan shares a border of more than 370km with Syria.

Last month, Jordanian government spokesman Mohamed Momani said Amman was hoping to reopen border crossings with Syria, noting relations between the neighbours had been going in the “right direction”.

The economy of Jordan, a country devoid of natural resources, has been severely affected by the closure of its borders with Iraq and Syria.

The UN says Jordan is hosting more than 650,000 Syrian refugees, but authorities in the kingdom put their actual number at 1.4 million. 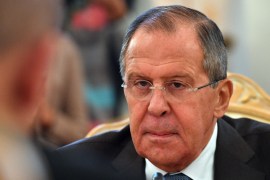 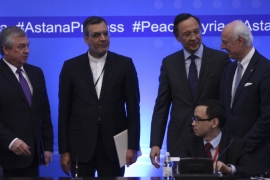