The UN Security Council unanimously condemned North Korea’s firing of a ballistic missile over Japan as an “outrageous” threat and demanded that the country not launch any more missiles and abandon all nuclear weapons and programmes.

In a statement, the Security Council said it was of “vital importance” that North Korea take immediate, concrete actions to reduce tensions and called on all states to implement UN sanctions on North Korea.

The council also expressed “its commitment to a peaceful, diplomatic and political solution”.

OPINION: N Korea is not Soviet Union and Trump is not Kennedy

“The Security Council stresses that these DPRK [North Korean] actions are not just a threat to the region, but to all UN member states,” said the statement, issued after closed-door talks at UN headquarters.

“The Security Council expresses its grave concern that the DPRK is, by conducting such a launch over Japan as well as its recent actions and public statements, deliberately undermining regional peace and stability.”

However, the US-drafted statement, which was agreed by consensus, does not threaten new sanctions on North Korea.

Diplomats say China and Russia – two veto-wielding council members – typically only view a test of a long-range missile or a nuclear weapon as a trigger for further possible UN sanctions.

China is working with other members of the Security Council on a response to North Korea’s missile launch, the Chinese foreign minister said on Wednesday.

Wang Yi spoke just hours after the UN condemnation and Japan’s UN ambassador suggested that a new sanctions declaration could come next.

Wang said China – which is North Korea’s only major ally – was “now working with other members of the Security Council to discuss the recent developments of the situation”.

He said that “based on the consensus of Security Council members, we are going to make a necessary response to the recent test launch of the missile”.

But Wang did not specify whether a fresh set of sanctions was looming.

“Whether there will be new measures going forward, that should be discussed by the Security Council and consensus needs to be formed,” he said.

The Security Council earlier this month unanimously imposed new sanctions on North Korea that could cut by a third the country’s $3bn annual export revenue after it staged two long-range missile launches in July.

“So while agreeing to condemn North Korea and also agreeing to enforce previous UN sanctions on that country, China making very clear as well that [they believe] there are other duties that some of the Security Council member states could exercise to help defuse the situation within that region,” he said.

“But generally, a clear signal of Security Council unity and a very important signal that China has confirmed it will help enforce the execution of sanctions already in place, and this is the critical issue.”

Tuesday’s missile launch – likely the longest ever from North Korea – over the territory of a close US ally sends a clear message of defiance as the US and South Korea conduct war games nearby.

Pyongyang’s official Korean Central News Agency said it was a Hwasong-12 intermediate range missile that the North first successfully tested in May and threatened to fire into waters near Guam earlier this month.

Kim expressed “great satisfaction” over the launch that he called a “meaningful prelude” to containing Guam, which is home to key US military bases that North Korea finds threatening, the agency said. He also said the country will continue to watch “US demeanours” before it decides on future actions.

Kim also said it’s “necessary to positively push forward the work for putting the strategic force on a modern basis by conducting more ballistic rocket launching drills with the Pacific as a target in the future.”

The launch seemed designed to show that North Korea can back up a threat to target the US territory of Guam if it chooses to do so, while also establishing a potentially dangerous precedent that could see future missiles flying over Japan.

South Korea’s Joint Chiefs of Staff said the missile travelled around 2,700km and reached a maximum height of 550km as it flew over the northern Japanese island of Hokkaido.

The KCNA said the flight test was a countermeasure to the Ulchi Freedom Guardian joint military exercises between the United States and South Korea that run through Thursday. Pyongyang views the annual war games between the allies as invasion rehearsals.

In a statement, US President Donald Trump said North Korea had signalled its “contempt for its neighbours” and that “all options are on the table” in terms of a US response.

Any new test worries Washington and its allies because it presumably puts North Korea a step closer to its goal of an arsenal of nuclear missiles that can reliably target the US. Tuesday’s test, however, looks especially aggressive to Washington, Seoul and Tokyo.

North Korea has conducted launches at an unusually fast pace this year – 13 times, Seoul says – and some analysts believe it could have viable long-range nuclear missiles before the end of Trump’s first term in early 2021. 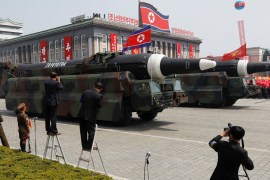 Japan condemns launch of ballistic missile, which fell into waters off Hokkaido island, as an ‘unprecedented threat’.