The UK on Tuesday urged the UN Security Council to convene to discuss reports of mass civilian casualties after raids by Myanmar security forces against Rohingya fighters.

The meeting is expected to take place on Wednesday.

“The secretary-general is deeply concerned at the reports of civilians being killed during security operations in Myanmar’s Rakhine state,” Guterres’ office said.

Deadly attacks on border posts broke out on Friday that killed one soldier, 10 police officers, an immigration official and 77 alleged fighters of the Arakan Rohingya Salvation Army (ARSA), the Office of State Counsellor Aung San Suu Kyi said in a statement.

Satellite data accessed by a rights body and released on Tuesday showed widespread fires burning in at least 10 areas in Myanmar’s Rakhine state.

‘This turn of events is deplorable’

Bangladesh border guards told Reuters they had sent about 550 Rohingya back across the Naf river that separates the two countries since Monday, despite an appeal by Guterres for Dhaka to allow Rohingya to seek safety.

Border patrols were also trying to block people from crossing the frontier.

Bangladesh is already hosting more than 400,000 Rohingya refugees who have fled Buddhist-majority Myanmar since the early 1990s. Dhaka has asked the United Nations to pressure Myanmar over its treatment of the Muslim minority, insisting it cannot accept any more.

Still, more than 8,700 have registered in Bangladesh since Friday, the UN said.

The top UN human rights official, Zeid Ra’ad al-Hussein, called on Myanmar on Tuesday to ensure its security forces refrained from using disproportionate force, adding that the political leadership had a duty to protect all civilians “without discrimination”.

“This turn of events is deplorable. It was predicted and could have been prevented,” he said.

Myanmar’s National Security Adviser Thaung Tun said at a news conference that Myanmar had come under attack and had the full right to defend itself. He added that “security personnel have been instructed to make sure that innocent civilians are not harmed”.

The region has seen simmering tensions between its Buddhist and Muslim populations since communal violence broke out in 2012.

A UN report found human rights violations, including crimes against humanity against Rohingya by security forces. The UN considers Rohingya one of the world’s most persecuted minorities. 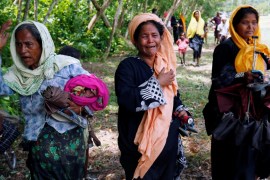 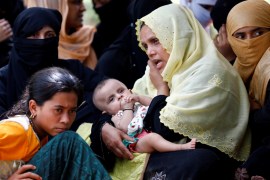