More than 1,000 mourners attended a funeral procession in Manila for a high school student, whose killing last week by anti-drug officers has caused rare public outrage over the country’s war on drugs.

Crowds chanted for “justice” on Saturday in the Philippine capital in what became one of the biggest protests in the country against President Rodrigo Duterte‘s anti-drug drive.

Kian Loyd Delos Santos was dragged by plain-clothes policemen to a dark alley in northern Manila, before he was shot in the head and left next to a pigsty, according to witnesses whose accounts appeared to be backed up by CCTV footage.

The death of the 17-year-old has drawn domestic attention to allegations by activists that police have been systematically executing suspected users and dealers, a charge the authorities deny.

“I came to support the family. I want justice for Kian and all victims – including my son,” Katherine David, 35, whose 21-year-old son was shot dead by police with two other men in January.

Mourners carried placards reading, “Stop the killings,” “Police, murderers” and “Justice for Kian” as they marched for about five kilometres from a church near Delos Santos’ house to the cemetery where he was buried.

The parents and lawyers of Delos Santos filed a murder complaint against the three anti-narcotics policemen on Friday.

“Kian was a very good son,” Saldy Delos Santos said in a message at the last mass for his son. “The entire community knew him as a good person … He was begging for his life …They [the killers] probably have no heart.”

‘Huge backlash on war on drugs’

Public support for the anti-drugs drive had until recently been strong.

“The number one concern for people here is not against Duterte himself, but they feel like he is relying on the wrong agent, which is the national police of Philippines to wage this war,” said Heydarian.

“You cannot wage a holy war with unholy men, so what people want here is to clean up the police force and to make sure that within the police forces there is accountability and discipline.”

Reporting from Manila, Al Jazeera’s Jamela Alindogan said that there might be a chance that this case, out of the more than 10,000 drug-related killings, would be solved.

“It remains to be seen whether this will change the approach of the president when it comes to his so-called war on drugs,” she said, “or if it even will lead to reform within the police institution in this country.”

“We march today to bring Kian to his final resting place and to support the call for justice for all victims of Duterte’s fascist drug war,” said Renato Reyes, secretary-general of left-wing activist group Bayan (Nation), said in a statement.

Bayan criticised the campaign for corrupting the police force “through a system of quotas and financial rewards for police officers”.

Delos Santos was among more than 90 people killed in the bloodiest week in Duterte’s anti-drug war since he took office on June 30, 2016.

The case has highlighted the allegations of abuse by police in the anti-drug war, in which at least 3,500 people have been killed over the last year.

Duterte has assured the public that police officers involved in Delos Santos’ death would go to jail if found guilty.

“If it was really a rubout, they (police officers) have to answer for it. They have to go to jail. I’m sorry,” he said.

Duterte has vowed in the past to protect the police against legal cases filed against them. 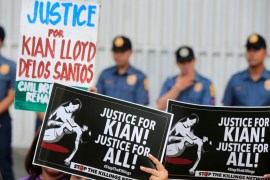 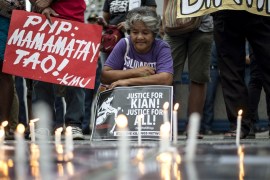 Committee investigates police accountability in Duterte’s drug war, with a focus on the fatal shooting of teenager.