Saudi Arabia’s High Judicial Court (HJC) has announced that, based on confirmed sightings of the new moon crescent, the first day of the Eid al-Adha Muslim festival will be Friday, September 1, 2017.

In the Islamic calendar, Eid al-Adha begins on the 10th day of the Dhu al-Hijjah lunar month; the actual date for Eid was confirmed after moon sighting on Monday, August 21, the 29th day of the previous lunar month.

If the moon was seen on Monday, Eid al-Adha would have been 10 days later on August 31. However, since it was not seen, the lunar month carried on to 30 days and Eid al-Adha will be celebrated on September 1.

Saudi Arabia’s Um al-Qura calendar marks Eid al-Adha 2017 on September 1, but the official date is announced by the High Judicial Court (HJC) after the moon sighting.

The Hajj pilgrimage to Mecca, which begins two days before Eid al-Adha, is also confirmed then.

On August 22, the High Judicial Court confirmed the sighting of the moon and officially announced September 1 as the first day of Eid.

Muslim communities in Europe, the United States and Canada follow Saudi Arabia’s Eid announcement, as announced by the European Council for Fatwa and Research, the Islamic Society of North America (ISNA), and the Fiqh Council of North America.

Bangladesh, Pakistan and India only accept local moon sighting with the naked eye to determine the lunar months’ start and thus follow their local calendar.

In Pakistan, the Ruet-e-Hilal Committee called for sighting the moon on August 22, but having not sighted the moon, it announced that Eid will be observed from September 2.

At the International Hijri Calendar Unity Congress held in Istanbul in May 2016, members of the Organisation of Islamic Cooperation voted in favour of adopting a unified lunar calendar.

Astronomers calculated the Dhu al-Hijjah new moon birth to be on Monday, August 21 at 18:30 GMT, but have also predicted that it will not be visible to the naked eye and that in Muslim-majority countries the moon will set before sunset.

On August 22, the moon should be visible to the naked eye across the US but may require a telescope in other parts of the world.

Traditionally, visibility of the moon crescent depends on the sighting location and meteorological conditions. Recently, it has also depended on the imaging technology used to sight the new moon.

Steve Bell at the UK Hydrographic Office told Al Jazeera that specialised infrared digital cameras could photograph the new moon, which is invisible to telescopes due to their limited optical range.

Such sophisticated digital imaging technology has been used in the moon sighting of Eid al-Fitr 2017.

Eid al-Adha is Islam’s holiest festival celebrated annually around the world and is an official holiday in Muslim-majority countries, and in the Philippines. Schools in New York also close for Eid al-Adha and Eid al-Fitr.

Eid al-Adha in Arabic means “festival of the sacrifice”, and for Muslims, it commemorates the day when prophet Abraham intended to sacrifice his son but was instructed by God to offer an animal instead.

The High Judicial Court announcement came on the day after the moon sighting.

Bangladesh, India and Pakistan celebrated Eid on September 13. According to the Central Ruet-e-Hilal Committee in Pakistan, the first day of the Dhu al-Hijjah lunar month was September 4, whereas for Saudi Arabia it was on September 3. 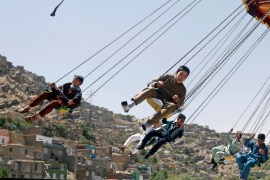 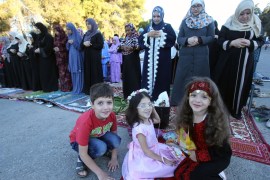 The roots of Eid run deeper than our differences

In a time of rising division, the spirit of unconditional generosity is more vital than ever. 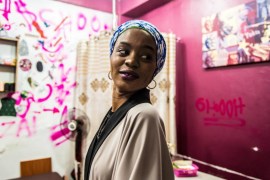 People from around the world show us what they’re wearing for Eid, the Muslim festival at the end of Ramadan.