Almost 1,000 people have been killed over a period of two weeks in some of the worst flooding to hit South Aisa in decades, with residents running out of food and clean water, officials said.

Bangladesh, India and Nepal have put the combined death toll at at least 800 since August 10.

The Red Cross said on Tuesday that 24 million people have been affected by the floods, with large areas of land submerged in water.

“The situation is going from bad to worse,” said Jagan Chapagain, Red Cross undersecretary-general, as he confirmed the death toll given by regional authorities.

“This is the worst flooding that parts of South Asia have seen in decades.”

Flood waters in the three countries have killed hundreds of people who were stranded and cut off from road access. Many villages are now only accessible by boat.

The Red Cross says it needs more than $3.5m to help people in Nepal.

The charity is planning to launch a separate campaign to raise funds to help people in Bangladesh.

But the organisation said India has the resources needed to respond, without foreign help.

Victims in India blame the government’s inability to respond adequately.

“There is water everywhere. Houses are under water, but no government help has reached us,” Kheya Ram, a resident of Bihar district Darbhanga, told Al Jazeera.

Almost one-third of Nepal and Bangladesh is flooded, leaving residents vulnerable to waterborne diseases such as diarrhoea, malaria, dengue fever and encephalitis.

The heavy rain has also taken a toll on wildlife, with rescue teams pulling stranded animals from raging waters in India’s Kaziranga National Park, including rare one-horned rhinos and other endangered species. 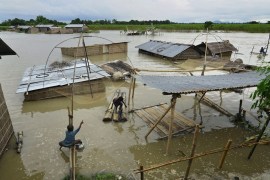 The summer rains are retreating across South Asia, but thousands of people remain displaced in India’s Assam state. 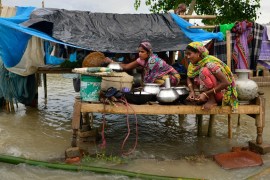 At least 52 dead in the Indian states of Assam and Bihar following monsoon rains that also hit Nepal and Bangladesh.