An activist known for helping Arab women in the Chicago area had her US citizenship revoked by a judge on Thursday and will be deported for failing to disclose convictions for bombings in Jerusalem decades ago.

Rasmea Odeh was interrupted three times by a judge as she used her court appearance in Detroit to criticise Israel and the United States and deny that she’s a “terrorist”.

“This is not a political forum for you to fan the flames of Israeli-Palestinian disputes … It’s about the application you filled out,” said US District Judge Gershwin Drain, who threatened to find her in contempt and send her to jail.

Odeh, 70, pleaded guilty in April to concealing her previous convictions when she entered the US in 1994 and applied for citizenship a decade later. She would have been barred from the country.

Drain followed the plea deal and ordered no prison time. Odeh now will wait for the government to deport her, probably to Jordan.

In 1970, she was convicted of two bombings, including one that killed two men at a supermarket in Jerusalem. She insists she was tortured by Israeli military into confessing. Odeh was released in 1979 as part of a swap with the leftist Popular Front for the Liberation of Palestine.

In Chicago, Odeh works as associate director of the Arab American Action Network, which provides social services and education. She is widely respected for her work with immigrants, especially Arab women.

“For 20 years, she lived here peacefully, honourably and gave more than many US citizens,” said defence lawyer Michael Deutsch, who criticised prosecutors for filing charges.

Odeh was convicted in 2014 and sentenced to 18 months in prison, but the conviction was overturned. She chose to make a deal with the government rather than face a second trial.

Detroit federal Judge Gershwin Drain praised Rasmea Odeh for her years of service to Palestinian women in the Chicago area but said the immigration system relies on honesty.

One hundred of Odeh’s supporters travelled from Chicago to attend the court hearing.

One of them, Hatem Abudayyeh, said Odeh was treated unfairly by the US justice system.

“This woman is going to be deported, only because she’s Palestinian, only because she has served her community and the cause of the liberation of Palestine for 50 years,” Abudayyeh told The Associated Press news agency.

“I will raise my voice to say this: We have the right to struggle for our country,” said Odeh of the occupied Palestinian territories. 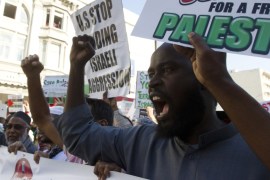 There is an undeniable organic connection between the struggle of the Palestinians and that of other people of colour. 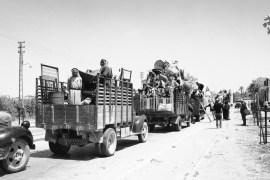