Brazil’s Supreme Court will decide this week on a landmark indigenous land rights ruling, against what activists and international bodies say is a backdrop of rising violence and diminishing rights for indigenous people in the country.

On Wednesday, the court will judge whether indigenous people will have the right to three territories – two in Mato Grosso state and one in Rio Grande do Sul – which experts say could have far reaching consequences for indigenous people across Brazil.

Judges will decide whether to apply a time limit on indigenous demarcations, the process by which indigenous people have legal protection to their land.

The ruling was signed by Brazil’s President Michel Temer last month and proposes to halt any demarcations of land on which indigenous people were not living before October 5, 1988 – when Brazil’s current constitution took effect.

“The fear is that if the Supreme Court applies this ruling in these three cases, it is going to massively set back the clock on indigenous rights,” Fiona Watson, campaign director at London based Survival International, told Al Jazeera.

Experts and indigenous groups have blasted the proposed ruling, saying that tens of thousands of indigenous people were forced from their lands before 1988, often under threat of violence.

Many were expelled from their land during Brazil’s 1964 to 1985 right-wing military dictatorship to make way for infrastructure projects and farmland. Today, hundreds of indigenous territories are currently awaiting demarcation.

Indigenous people’s right to land in enshrined in Brazil’s constitution but is rarely respected, and the vast majority of violence against indigenous people in Brazil happens because of disputes over land.

Legal experts have blasted the move as unconstitutional, pointing out that in Brazil’s constitution indigenous people have the original right to land with no reference of deadlines for territories to be occupied.

“The ruling clearly violates the constitution,” Luciano Mariz Maia, a prosecutor working with indigenous issues at Brazil’s Prosecutor General’s Office, told Al Jazeera – adding that the ruling is advisory and judges are not obliged to follow it.

Indigenous advocacy groups say that, if approved, the ruling could lead to increased violence against indigenous people in Brazil.

“This ruling legitimises the violence that indigenous people in Brazil have historically suffered,” said Gilberto Vieira dos Santos, deputy secretary at Brazil’s indigenous Missionary Council which is connected to the Catholic Church.

“If this ruling is approved, we will certainly have more invasions of indigenous land,” he told Al Jazeera. “It sets a precedent of not recognising the territorial rights of the indigenous people.”

In June this year, United Nations and inter-American experts warned that indigenous and environmental rights were under attack in Brazil, especially regarding land demarcations.

The warning followed just a month after members of the Gamela tribe in Maranhao were attacked with machetes and rifles in a bloody land dispute.

Killings of environmental and land defenders, including indigenous people, have soared this year. Watchdog group CPT recorded 37 killings connected to land conflict in the first six months of 2017, one-third higher than in 2016.

Proponents of the ruling, however, say it gives legal protection to small rural producers, many of whom have held land titles for decades but could be forced to abandon their land when it is demarcated to indigenous people.

“There are families that have had land titles for 100 years. The right to property cannot be changed because of an anthropological report,” congressman Luis Carlos Heinze, one of the most vocal supporters of the ruling, told Al Jazeera by phone.

“They can’t be penalised because someone thinks that 100 years ago, 200 years ago there were Indians there,” he added. “Those who produce in Brazil, agriculture, industry, services, they need legal protection.”

Heinze, elected by Rio Grande do Sul state in southern Brazil – home to one of the indigenous territories that the ruling could be applied to on Wednesday – said that he believes as many as 90 percent of the hundreds of demarcation processes are irregular or fraudulent.

But indigenous advocates accuse Temer of signing the ruling to please a powerful agriculture caucus in congress, two weeks before he faced a congressional vote that could have removed him for corruption. He survived the vote with heavy support from the agriculture caucus.

Brazilian indigenous organisations have planned protests in the capital Brasilia on the day of the judges’ ruling.

“This ruling would just be a continuation of the massacre of indigenous people in Brazil,” said Tonico Benites, a spokesman for the Guarani Kaiowa indigenous tribe, who was in Brasilia to protest. 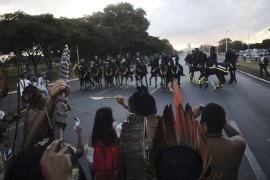 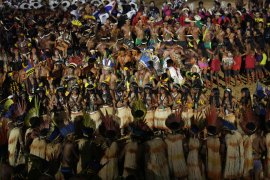 The event is billed as a chance for indigenous groups from as far as Ethiopia and Mongolia to test their mettle.