The United Nations says unidentified gunmen attacked the headquarters of the UN peacekeeping force in the northern Mali city of Timbuktu, killing seven people and injuring seven others.

The UN peacekeeping mission says six assailants also were killed by UN peacekeepers in the attack on Monday afternoon.

The mission says five Malian security guards and a Malian contractor working for the mission were killed along with a member of the Malian gendarmerie.

The mission, known as MINUSMA, said it dispatched a quick reaction force and attack helicopters to secure the Timbuktu headquarters

“I do not have enough words to condemn this cowardly and despicable act which takes place a few hours after the terrorist attack in Douentza,” Mahamat Saleh Annadif, head of MINUSMA, said in a statement.

The peacekeeping mission in Mali is the deadliest of the UN’s 16 global peacekeeping operations, and this was one of the worst losses of mission staff.

The conflict prompted French military intervention in January 2013 and the deployment of a 12,000-strong UN peacekeeping operation, known as MINUSMA, several months later.

Since the mission began, there have been at least 128 fatalities of MINUSMA staff.

Armed fighters killed three UN peacekeepers in an attack outside their base in Kidal in northern Mali in June. 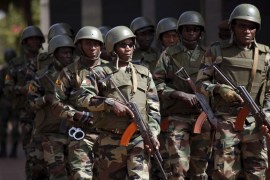 Five soldiers killed, eight wounded in an attack in northern region, which is frequently attacked by armed fighters. 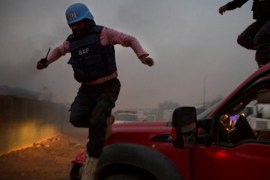 More than 100 soldiers have died in recent months in Mali, making it the most deadly United Nations mission to date.