Relatives of passengers aboard missing flight MH370 have demanded that Malaysia accept a US exploration firm’s offer to take up the hunt for the aircraft, which was suspended earlier this year.

No trace of the Malaysia Airlines plane, which disappeared in March 2014 with 239 people on board, was found during a lengthy deep-sea hunt in the southern Indian Ocean off western Australia, with the years-long search called off in January.

US company Ocean Infinity – a seabed exploration firm with a fleet of advanced underwater search vehicles – has said it will take on the financial risk of a renewed search for the missing Malaysian airliner.

Families of those on the plane when it went missing urged the Malaysian government on Friday to agree to a private-sector hunt for the flight’s wreckage.

Malaysia, Australia and China suspended a nearly three-year search in the southern Indian Ocean in January after scouring 120,000 square kilometres of remote seabed and failing to find any trace of the airliner.

Ocean Infinity said it remained hopeful that Malaysia would accept its offer to continue the search using a team of advanced, fast-moving deep-sea drones fitted with sonar equipment.

“The terms of the offer are confidential, but I can … confirm that Ocean Infinity have offered to take on the economic risk of a renewed search,” the company said in an email, the AP news agency reported.

“We’re in a constructive dialogue with the relevant authorities and are hopeful that the offer will be accepted,” it added.

Voice370, a support group for families, said under the terms of the offer made in April Ocean Infinity “would like to be paid a reward if and only if it finds the main debris field”.

“Why hasn’t Malaysia accepted this win-win offer?” Voice370 asked in a statement.

Malaysia did not immediately respond on Friday to the families’ question.

The group said the offer should be accepted “without further delay” and urged authorities to provide them with details.

“We are constantly in limbo. They [authorities] do not engage us. It is upsetting and frustrating,” Grace Nathan, a Malaysian lawyer whose mother Anne Daisy was on the plane, told AFP news agency.

“We are always kept in the dark.”

An international board of experts has concluded, based on an analysis of Boeing 777 debris that drifted and washed up on western Indian Ocean beaches, the flight most likely crashed in a 25,000 square kilometre area of ocean on the northern boundary of the last search zone, far southwest of Australia.

But Malaysia, Australia and China agree the newly identified area is too big to justify resuming the publicly funded search, which has already cost $160m.

Australia has coordinated the search on Malaysia’s behalf because the plane is believed to have crashed in Australia’s zone of search and rescue responsibility on March 8, 2014, after flying far off course on a journey from Malaysian capital Kuala Lumpur to Beijing.

Transport Minister Darren Chester declined to comment on the possibility of a private search.

“Malaysia, as the state of registry for the aircraft, retains overall authority for any future search and any questions regarding possible future search efforts should be directed there,” his office said in a statement.

“Australia stands ready to assist the Malaysian government in any way it can.” 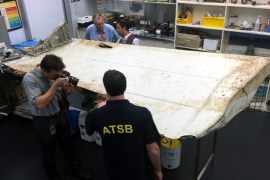 Underwater search for MH370 is suspended

Australia, China, Malaysia say unable to solve one of the greatest mysteries in aviation history.

Wing part confirmed to be from flight MH370

Australian investigators used part number on debris found in May to link it to missing Malaysian Airlines plane.