The prime minister of Cambodia has issued a six-day ultimatum to Laos to pull back its troops who have allegedly trespassed into a border area or face a military response.

Hun Sen said on Friday that about 30 Laos soldiers crossed into Cambodian territory in April in northern Stung Treng province despite repeated requests by his government for them to leave the area.

He said he had been in touch with the government of Laos.

“I appeal to Laos Prime Minister Thongloun Sisoulith to withdraw troops from Cambodian territory without any conditions,” Hun Sen said during a ceremony in the capital, Phnom Penh.

Military commanders have been ordered to deploy troops along with multiple rocket launchers to the border area, he said, giving Laos the “ultimatum” of pulling out by August 17.

“We are friends, but a friend cannot step on [our] head,” he said, adding he was running out of patience with “the invasion” by Laos troops.

“We are not waging war, but we just want our land back.”

Calls and emails to the Laos embassy in Phnom Penh were not returned.

Cambodia and Laos share a 540km land border, but large tracts have not been officially demarcated, leading to territorial squabbles.

The Laos border is hard to police with increasing amounts of drugs – mainly methamphetamine and heroin – being moved from Laos into Cambodia. 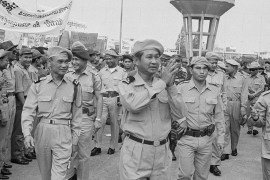