Public faith in Afghanistan’s police and security services has been shaken again after a pair of suicide attackers killed at least 29 Shia worshippers in the western province of Herat.

“Around 50 Shias killed and 80 wounded in an attack by Islamic State fighters yesterday on a mosque in western Afghanistan’s Herat,” the group’s propaganda outlet Amaq said.

Tuesday’s blast, claimed by the Islamic State of Iraq and the Levant (ISIL) group on Wednesday, comes amid a spate of nationwide assaults over 48 hours.

Most recently, a Taliban attack on Wednesday against NATO troops in Kandahar killed two US soldiers.

Deadly violence was also reported on Tuesday in Helmand province and Paktia.

WATCH: INSIDE STORY – Can the US defeat the Taliban in Afghanistan? (23:49)

On Monday, fighters belonging to ISIL, also known as ISIS, claimed responsibility for a suicide blast at the Iraqi embassy in Kabul that killed at least two Afghan guards.

Protesters took to Herat’s streets on Wednesday after funerals for some of the victims of Tuesday’s attack at the popular Jawadya mosque.

Jilani Farhad, a spokesman for Herat’s governor, said he feared the death toll could rise, given the gravity of some of the injuries sustained by more than 60 people.

Before blowing themselves up, two attackers fired on private guards outside the mosque in Herat city and then shot at crowds of worshippers.

Police and the guard did not “shoot back”, witness and activist Mohammed Jawad Amid told Al Jazeera.

“People started screaming and running out. All eyes were on the police and the security guards who did not shoot back when asked. They said they were not authorised to do so,” he said.

There were four attackers, two of whom managed to escape, Amid said.

“The police also escaped from the scene.”

Angry locals clashed with the police and set a checkpoint on fire after the attack, venting their frustrations over what they said was a weak police response.

Security was heightened in Herat in advance of the rallies, in which protesters are demanding better protection.

Funerals took place in the afternoon.

Jawad, the protest organiser, said both Shia and Sunni Muslims are attending the rally.

“Herat is united. When the injured were brought to the hospital, many Sunnis volunteered to donate blood,” he said.

“Everyone is angry. It’s not about Shia or Sunni. No one cares about this at the moment. We are all a target for these terrorists.”

‘May God punish them’

Ismail Mohammadi, a shopkeeper, spent Tuesday evening in Herat searching for his nephew as he received calls from family members asking about Ali’s whereabouts.

Ali was among those killed in the mosque bombing.

“I was at my shop at the time of the blast. When I heard a loud bang, I closed my shop and walked towards the area where the attack took place,” Mohammadi told Al Jazeera.

“I knew my nephew used to go to that mosque every Wednesday as there are special prayers on that day. While I walked towards the mosque, my niece called me saying that Ali’s phone was switched off.”

Mohammadi searched hospitals only to discover that his nephew had died.

“The mosque is God’s home and we think it’s the safest place in the world, but people were butchered there as well.”

Mohammadi said he believed more than 70 people were killed, and that officials were covering up the death toll.

“I protest today to hold our government and security officials responsible for the deaths. As for the terrorists who killed my nephew, may God punish them and take my revenge,” Mohammadi said. 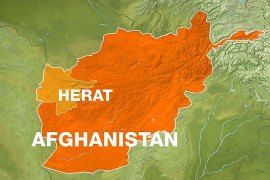