A new quarterly report published by the Special Inspector General for Afghanistan Reconstruction (SIGAR) shows the US has failed to account for hundreds of millions of dollars it spent on propping up the Afghan government, while the value of opium production in the country has doubled in a year.

The US has spent more than $714bn in the past 15 years supporting Afghanistan’s governments, bolstering its armed forces and building infrastructure in the country, but owing to a rampant culture of corruption and lack of US monitoring on the ground, the results are less than satisfactory.

According to SIGAR, despite the massive US spending, the balance between the US-backed Afghan government and armed groups fighting against it has remained at a standstill since 2016. Sixty percent of the total districts in the country are under government control and the remaining 40 percent remain under the Taliban or under the control of other armed groups.

The number of bombings and clashes between fighters and government forces also increased during the reporting period.

“Although the … programs provided some assistance to the Afghan National Defense and Security Forces, it is almost impossible to assess whether this assistance was worth the $457.7 million spent on these programs,” the report said.

On June 13, 2017, Secretary of Defense James Mattis told the Senate Armed Services Committee the US was “not winning in Afghanistan right now, and we will correct this as soon as possible”.

New US strategy for Afghanistan

Mattis is expected to deliver the Trump administration’s new strategy for Afghanistan, Pakistan and India in the coming days. The new US strategy is expected, according to some reports, to send more US troops to Afghanistan as advisers and trainers to its armed forces.

But a Department of Defense (DoD) official, who declined to speak publicly because he is not authorised to do so, told Al Jazeera that the thinking among top DoD brass is that the new strategy on Afghanistan could go either way.

“The administration has yet to decide whether to increase the level of troops in Afghanistan or even decrease it,” said the official.

The new regional strategy will also see a different approach to Pakistan, the DOD official said.

“Pakistan might see a tougher approach by the Trump administration that requires it to end its practice of providing sanctuary for insurgent elements inside its territories,” he said.

A report by The Wall Street Journal on Sunday, however, quoted a senior administration official saying the Trump White House might scale back the US troops’ presence in Afghanistan.

If the Trump administration has decided to scale back US troops’ presence, the current situation in the country might become worse than it is today.

SIGAR recommended in its report that the US must not shy away from taking risks and should venture beyond the heavily fortified US-government compounds to monitor the US investments and spending in the country.

But if the administration decides to scale back the US footprints in the country, it will be less clear how the US will account for the billions of dollars already earmarked to be spent in Afghanistan during the 2018 fiscal year.

“SIGAR is concerned that US officials, whether at State, USAID, Justice, Treasury, Commerce, or elsewhere, cannot oversee the billions of dollars the United States is dedicating to Afghan reconstruction if, for the most part, they cannot leave the US embassy compound,” said John Sopko, Special Inspector General for Afghanistan Reconstruction.

“Hunkering down behind blast walls damages not only the US civilian mission but also handicaps the US military mission,” he said. 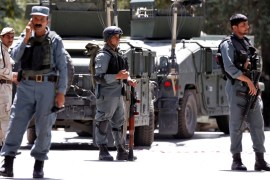 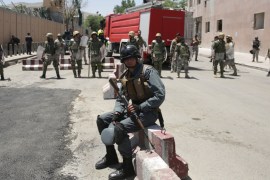 Officials say 16 dead in strike confirmed by US military as having killed ‘friendly Afghan forces in a compound’.