Qatar Airways is expected to have access to three contingency routes over international waters in early August, after delegates at a UN-led meeting on Monday discussed air corridors for Doha following a rift with its neighbours.

The closed-door meeting with the UN aviation agency’s governing council in Montreal discussed contingency routes that had been planned as part of a preliminary agreement reached earlier this month, but not yet opened to Qatar-registered planes.

Qatar had asked the International Civil Aviation Organization (ICAO) to intervene after its national carrier was denied access to the airspace of Saudi Arabia, Bahrain, Egypt and the United Arab Emirates as part of economic sanctions.

The four countries severed ties with Qatar on June 5, accusing it of supporting “terrorism”, an allegation Doha strongly denies.

The closing of their airspace forced state-owned Qatar Airways to fly longer, more expensive routes, prompting Doha to push for international corridors over Gulf waters currently managed by the UAE.

“Within a week or so they should have new routes,” said a source, who spoke to the Reuters news agency on condition of anonymity.

The ICAO on Monday called on all member states to comply with the 1944 Chicago Convention on International Civil Aviation and its addendums, reported Qatar News Agency.

Jassim bin Saif Al Sulaiti, Qatar’s transport minister, told Al Jazeera that Doha’s main goal at the session had been that all states should adhere to the Chicago agreement.

“The organisation insisted on using the word ‘adhere’ because there was a violation of international safety and security. This is what the international community and the states represented think,” he said.

Keith Mackey, an aviation consultant, told Al Jazeera that the ICAO rules on standards by consensus and does not have regulatory powers.

“ICAO can’t force these countries to allow Qatar or any other airline to fly over their airspace. They have to do it with permission and it’s really a political problem and not a technical problem,” he said.

“ICAO prefers to deal with technical problems and the statements they made today were unusual; ICAO doesn’t usually go so far as to request member states to follow international protocol, so that may be a positive step in the right direction,” added Mackey.

The ICAO cannot impose rules on states, but regulators from its 191 member countries almost always adopt and enforce the standards it sets for international aviation.

Steps to ease the blockade

Al Jazeera’s Daniel Lak, reporting from Montreal, said that the action at the ICAO is one of several steps that Qatar is taking to ease or end the blockade – including filing a case at the World Trade Organization and pursuing ongoing talks with the International Maritime Organization.

“Qatar also says it will return to ICAO after the organisation’s summer break to press again for a complete lifting of the blockade and to continue with its case that airspace restrictions are dangerous and illegal,” said Lak.

On Monday, Qatar also filed a wide-ranging legal complaint at the World Trade Organization to challenge the trade boycott.

On Sunday, Saudi state news agency SPA cited a statement from the Saudi aviation authority saying it had already agreed to nine emergency air corridors, which were identified under ICAO supervision, and would be open from August 1.

However, Qatar’s transport and communications ministry and its aviation authority denied the four countries had taken such a decision, the state news agency QNA said.

In comments to Al Jazeera, the transport minister said the boycotting countries had discriminated against Doha in violation of an international agreement guaranteeing overflights.

“These countries have used this right arbitrarily and imposed it on aircraft registered only in Qatar,” Al Sulaiti said. 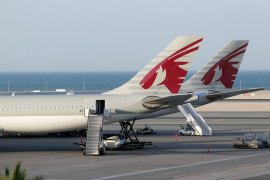 Qatar says reports that Saudi-led group would allow Qatari planes to use air corridors in emergencies are false.