The transfer of thousands of Syrian fighters and refugees from Lebanon’s border region into rebel territory in Syria in exchange for Hezbollah prisoners has been delayed to Tuesday.

A Hezbollah military media unit said that the delay was to allow for “logistical measures”, including the arrival to the area of all buses being used for transportation under a local ceasefire deal.

Under the deal between the opposition fighters and Hezbollah, about 9,000 rebels and their relatives were to leave to rebel-head areas in Syria in exchange for eight Hezbollah fighters held by the Jabhat Fateh al-Sham, formerly known as the al-Nusra Front.

The first step of the ceasefire, brokered by Lebanon’s internal security agency, unfolded on Sunday as the two sides exchanged the bodies of dead fighters.

The deal includes the departure of all Jabhat Fateh al-Sham fighters from Lebanon’s border region around the town of Arsal, along with any civilians in nearby refugee camps who wish to go.

The truce echoes deals struck within Syria in which Damascus has shuttled rebels and civilians to Idlib province and other opposition areas. Such evacuations have helped President Bashar al-Assad recapture several rebel bastions over the past year.

“This is the first time that we’re seeing a deal which would see such a large number of Syrian refugees and fighters who are opposed to Syrian President Bashar al-Assad, and have been in open conflict with Hezbollah and Lebanese forces, exit the area and go to another area in Syria,” he said.

Lebanon’s Hezbollah has played a major role in fighting rebels along the frontier during Syria’s six-year war, sending thousands of combatants to support Assad’s government.

Last week, Hezbollah took most of the mountainous zone of Juroud Arsal in a joint offensive with the Syrian army to drive Jabhat Fateh al-Sham fighters from their last border foothold.

The Lebanese army, which receives considerable US and British military support, did not take an active part in the operation, setting up defensive positions around Arsal.

The next phase is expected to target a nearby enclave currently in the hands of the Islamic State of Iraq and the Levant (ISIL) group.

The UN refugee agency, not involved in the deal, was trying to reach refugees in the Arsal region to evaluate whether returns were voluntary, spokeswoman Lisa Abou Khaled said.

“UNHCR believes that conditions for refugees to return in safety and dignity are not yet in place in Syria,” she said, with war continuing across large swaths of the country.

The multi-sided Syrian conflict has killed hundreds of thousands of people and driven at least 11 million from their homes – about half of Syria’s pre-war population.

Nearly 1.5 million refugees have poured into Lebanon and they now make up around a quarter of the country’s population. Most languish in severe poverty and several thousand live in makeshift camps east of Arsal. 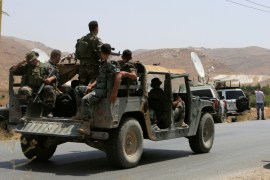 Ahmad al-Fliti, who was mediating between Hezbollah and Syrian opposition fighters, was killed when his car was shelled. 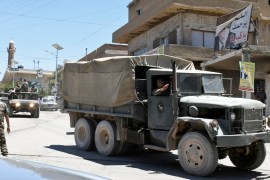