Islamabad, Pakistan – Deposed Pakistani Prime Minister Nawaz Sharif has named his younger brother Shahbaz to replace him as the country’s leader, after having been removed from office by the Supreme Court a day earlier for lying on a wealth declaration.

Addressing a televised meeting of leaders of his PML-N party in Islamabad on Saturday, the elder Sharif said he accepted the Supreme Court’s verdict, but did not agree with it.

Shahbaz Sharif, currently the chief minister of Punjab province, which is Pakistan’s most populous region and the Sharif’s political heartland, will have to resign from that post and run for a by-election to join Parliament before he is elected as prime minister.

“It will take Shahbaz some time to be elected, about 50 days … so in the interim period … I suggest Shahid Khaqan Abbasi as the candidate,” the former prime minister said.

Pakistani President Mamnoon Hussain is due to convene a session of Parliament shortly to elect Abbasi to the post.

Sharif’s PML-N party holds a comfortable majority in the lower house of Parliament and the election is expected to pass without much drama.

‘I don’t understand grounds for dismissal’

Sharif was removed from office on Friday on grounds that he did not declare his role in a company based in the United Arab Emirates, from which he was paid a salary, in a 2013 wealth declaration made before running for Parliament.

Sharif dismissed the allegations against him as minor, adding that no corruption charges had yet been proven against him.

“I still do not understand the grounds for my dismissal,” he said. “I am only content that I was not disqualified on the grounds of alleged corruption.”

Sharif contends that he never withdrew that salary and was therefore not liable to declare it.

Friday’s landmark ruling followed months of hearings sparked by the leak of the Panama Papers, which showed that three of Sharif’s children were connected to three offshore companies registered in the British Virgin Islands.

Those companies, the documents showed, had been involved in the mortgage of four apartments in London’s posh Park Lane neighbourhood. Sharif’s political opponents had been alleging for years that the properties had been obtained through ill-gotten gains made during Sharif’s previous two terms in power in the 1990s.

The Sharif family has denied any wrongdoing, saying the apartments were bought using proceeds from the sale of a steel mill in the UAE.

The Supreme Court, having constituted a high-level investigative panel to probe the allegations, concluded on Friday that there was enough evidence to refer Sharif, his three children and Finance Minister Ishaq Dar to a corruption trial court.

No democratically elected prime minister in Pakistan‘s history has completed the five-year term in office.

Sharif himself has been removed twice before from power. In 1993, he was removed after a bitter struggle with the country’s president, and in 1999 the military overthrew him in a bloodless coup.

Other prime ministers have been removed through votes of no-confidence in Parliament, the dissolution of the assemblies by the military or in direct military coups.

Pakistan’s military has ruled the country for roughly half of its 70-year history. 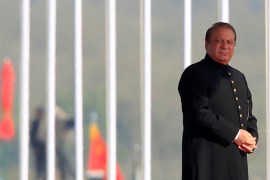 A look at the political ramifications in Pakistan after the disqualification of the country’s leader, Nawaz Sharif.