Two women accused of poisoning the estranged half-brother of North Korea’s ruler are expected to plead innocent when they appear in a Malaysian court on Friday, their lawyers said.

Indonesian Siti Aisyah, 25, and Doan Thi Huong, 29, from Vietnam are suspected of smearing Kim Jong-nam’s face with the banned VX nerve agent at a crowded airport terminal in Kuala Lumpur on February 13.

The women, who face the death penalty if convicted, say they were duped into thinking they were playing a harmless prank for a hidden-camera show.

They are the only suspects in custody in a killing that South Korea’s spy agency said was part of a five-year plot by North Korean leader Kim Jong-un to kill his half-brother.

North Korea has refused to accept the dead man was Kim Jong-un’s half-brother and has suggested the victim died of a heart attack.

It has accused Malaysia of working with South Korean and other “hostile forces”.

Siti Aisyah was recruited in early January by a North Korean man, known as James, to star in his video prank shows, according to her lawyer Gooi Soon-seong.

James, identified by police as Ri Ji-u, had Siti practise at malls, hotels and airports by rubbing oil or pepper sauce on a victim’s face, the lawyer said.

Aisyah was paid between $100 and $200 for each prank and hoped the income would allow her to stop working as a social escort.

In late January, Aisyah flew to Cambodia to meet Hong Song-hac, one of four North Korean suspects who left Malaysia on the day of the killing. He told her he produced video prank shows for the Chinese market, the lawyer said.

Gooi said Hong asked Aisyah to do several more pranks at the Kuala Lumpur airport a few days before Kim was attacked.

He said that Hong identified Kim to Aisyah at the airport and allegedly put the poison on her hand.

Aisyah, who has a son, wrote to her family telling them to pray for her “so that the case will be over soon and I can go back home”.

Security camera footage apparently showed her lunging at Kim Jong-nam from behind in a crowded airport terminal.

Little is known about Huong. Raised on a rice farm in northern Vietnam, her family said they had hardly heard from her since she left home a decade ago, aged just 18 years.

Photos on her Facebook page show Huong wearing a white shirt that appears to say “LOL”, like the one seen on security camera video during the attack.

It shows her posing for selfies in Kuala Lumpur a few days before the attack and in January in Phnom Penh, Cambodia. 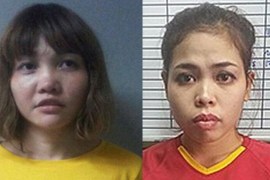 Two women charged with killing half-brother of North Korea’s leader with nerve agent to be tried in high court.