London, UK – The head of Al Jazeera English, Giles Trendle, said the channel is not going anywhere despite demands by Saudi Arabia and several other Arab states to close it down.

During an event at London’s iconic Frontline Club on Monday, Trendle said editors at the outlet were “encouraged” by statements made by Qatar’s Foreign Minister Sheikh Mohammed bin Abdulrahman al-Thani that the future of Al Jazeera was not up for negotiation.

Saudi Arabia, Bahrain, Egypt, and the United Arab Emirates had called for the closure of Al Jazeera as part of a list of 13 demands they expect Qatar to comply with, in exchange for the normalisation of ties, which were broken off when the diplomatic crisis started in May.

When asked whether the channel was closing down, Trendle responded with a simple “No”.

“Since day one, our journalists all around the world have been at their desks doing their jobs and out in the field reporting,” he said.

“Obviously it’s an unusual situation, but it’s business as normal … we’re just getting on with our jobs.”

Human Rights Watch has described the demand to close Al Jazeera “absurd” and the Committee to Protect Journalists deemed the call “outrageous”.

Trendle was joined by Wadah Khanfar, the former director general of Al Jazeera, and the editor-in-chief of Middle East Eye, David Hearst.

The Saudi-led group has also demanded the closure of Middle East Eye, an online news organisation which has been accused of receiving funding from Doha.

Hearst denied the allegations and said the demands by Saudi Arabia and its allies amounted to stifling independent and critical media, particularly Al Jazeera’s Arabic channel.

They don't want their own people reading genuinely independent outlets.

“Al Jazeera Arabic is doing a fantastic job, and it’s popular, that’s what they don’t like,” he told a packed room at the venue in central London.

“They don’t want their own people reading genuinely independent outlets.”

Khanfar, who led Al Jazeera from 2006 until his resignation in 2011, decried accusations that Al Jazeera was editorially beholden to groups such as the Muslim Brotherhood.

“Once you have an editorial board that decides the lines, you [as a journalist] need to follow the lines unless these lines are springing from an ideological background,” he said.

“We should stop this kind of nonsense.”

LIVE: @frontlineclub presents 'The Al Jazeera Case', a discussion on the recent call for the closure of Al Jazeera. https://t.co/5mtPSWWNxf

Interviews with members of proscribed groups were only carried out due to editorial necessity and interest, and not to promote any organisation, he said.

READ MORE: Qatar lashes out at UAE over QNA hacking

The incident led to a breakdown in relations between Saudi Arabia and its allies on one side, and Qatar on the other.

US intelligence officials later told the Washington Post that the cyber attack was arranged by the UAE, an allegation the country rejects. 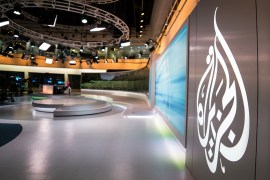 What’s behind the demand to shut down Al Jazeera?

The Saudi-led group appears to be backing down on its demand to shut down Al Jazeera.