Correction14 Jul 2017
A previous version of this article stated that Zambia's government declared a state of emergency. However, the government of Lungu points out that all government action continues to be subject to constitutional principles and judicial oversight.

Zambia‘s parliament has approved enhanced measures for security services for a 90-day period in a decree by President Edgar Lungu, a move critics say is an effort to tighten his grip on power.

Opposition legislators boycotted the vote on Tuesday, leaving only the 85 members of the president’s majority party to pass the measure.

Lungu invoked the emergency powers last week, alleging that opposition parties were behind a string of arson attacks intended “to create terror and panic,” including one that burned down the main market in the capital Lusaka.

Nobody was killed or injured in the blaze.

Political tensions in Zambia, seen as one of Africa‘s more stable and functional democracies, have been rising since the arrest on treason charges of main opposition leader Hakainde Hichilema, who narrowly lost to Lungu in a bruising election last year.

Hichilema, along with five others, is accused of trying to overthrow the government after a column of opposition vehicles failed to make way for the president’s motorcade.

Lungu’s aide, Amos Chanda, said the measures “were deemed necessary to restore public order” and that civil liberties such as free movement had not been suspended.

Hichilema’s United Party for National Development (UPND) has accused Lungu of endangering the country’s democracy and plotting a dictatorship.

Some 48 UPND legislators could not take part in Tuesday’s vote as they had been suspended by parliament for boycotting an address by Lungu in March.

The decree “constitutes abuse of power designed to silence his critics and kill democracy,” UPND vice president Geoffrey Mwamba said in a statement on Monday.

“It is clear that (Lungu’s) actions are premeditated and designed to strengthen the hand of dictatorship.”

Mwamba denied any UPND involvement in the fires.

“Innocent Zambians will be arrested on mere suspicion just to fulfil the Patriotic Front’s political agenda to remain in power forever,” he said.

Church leaders in Zambia have also criticised the emergency powers, warning the move would scare away investors needed to boost Zambia’s weak economy.

“This is a clear sign of dictatorship – just because of a fire at a market and you declare a state of emergency?” Bishop Simon Chihana, president of the International Fellowship of Christian Churches, told the AFP news agency.

“Lungu is only thinking about his continued hold on to power. He is not concerned about the well-being of Zambia.”

The country’s last state of emergency was declared in 1997 by then president Frederick Chiluba after an attempted coup. It was lifted the following year. 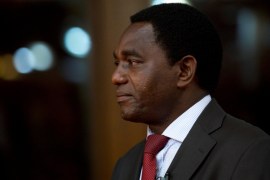 Court refuses to dismiss charges against Hichilema, who was arrested for allegedly blocking the president’s limousine. 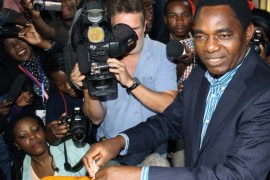