A California Democrat has filed an article of impeachment against US President Donald Trump in a long shot bid to remove the president from office.

Sherman acknowledges that filing the article is “the first step on a very long road”.

“Recent disclosures by Donald Trump Jr. indicate that Trump’s campaign was eager to receive assistance from Russia,” Sherman said in a statement.

“It now seems likely that the president had something to hide when he tried to curtail the investigation of (now-fired) National Security Advisor Michael Flynn and the wider Russian probe,” he added.

“I believe his conversations with, and subsequent firing of, FBI Director James Comey constitute obstruction of justice.”

Sherman has one co-sponsor, fellow Democrat Al Green of Texas. Democratic leaders have distanced themselves from the effort, believing it energises Trump’s base.

White House spokeswoman Sarah Huckabee Sanders described the move as, “utterly and completely ridiculous and a political game at its worst”.

The effort is likely to stall in the Republican-controlled congress.

While a number of Republicans have rebuked Trump or expressed concern for various stumbles, there is no signal from either the House of Representatives or the Senate that their Republican leaders are prepared to begin impeachment proceedings.

Al Jazeera’s Heidi Zhou-Castro, reporting from Washington, DC, said Sherman’s move was “a protest statement that does formally initiate the process of impeachment, but it’s likely to stop right here where it started”.

She said Sherman had acknowledged this but had said that many more could join the impeachment effort at a further point in time.

“But speaking frankly, impeachment of Donald Trump is very unlikely as long as Republicans hold the majority in congress,” said Zhou-Castro.

Sherman filed the article a day after the president’s son, Donald Trump Jr., acknowledged that he met a Russian lawyer Natalia Veselnitskaya during the campaign.

Veselnitskaya met in June 2016 with Donald Trump Jr., who had agreed to the meeting after being promised damaging information about Democrat Hillary Clinton provided by the Russian government.

Trump Jr. said he received no information about Clinton at the meeting.

The president has questioned his own intelligence agencies and whether the Russians actually interfered in the election. However, federal authorities say they have definitive evidence that the Kremlin meddled in the US presidential election.

Meanwhile, Democrats on the House Judiciary Committee on Wednesday questioned the decision by the Trump administration’s Department of Justice to settle a money-laundering forfeiture case with a Russian real estate investment firm that has ties to the Russian lawyer who met last year with President Donald Trump’s son.

Natalia Veselnitskaya represented the owner of Russian firm Prevezon Holdings Ltd. The letter sent by House Judiciary ranking member John Conyers and other Democrats asked Attorney General Jeff Sessions whether Veselnitskaya had been involved in settlement negotiations between the Russian firm and the Justice Department.

Prevezon agreed in May to pay $6m to the government to avoid a civil trial on charges that the firm had laundered proceeds from an alleged $230m Russian tax fraud scheme.

Veselnitskaya represented Dennis Katsyv, Prevezon’s owner. Katsyv backed a lobbying campaign in congress and with federal officials last year that was aimed at scuttling the Magnitsky Act, a 2012 law that used sanctions to target officials and associates of Russian President Vladimir Putin and his government.

The House Democrats also asked why the Department of Justice settled with Prevezon two days before trial and asked whether Trump, his family or other aides contacted the justice department about its case against Prevezon. The Democrats asked for copies of any messages showing such contacts.

“It’s a lot to unpack, but what it boils down to is that this is a troubling development that asks whether there is yet another link in this very tangled web that seemingly connects Trump’s very inner circle with Russia,” said Al Jazeera’s Zhou-Castro. 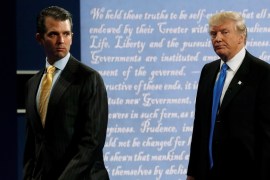 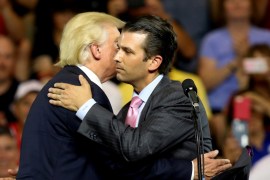 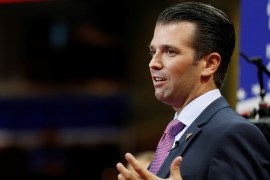 New York Times claims US president’s son was told in email that Russia was source of ‘compromising’ Clinton information.