A vote to replace President Joseph Kabila will probably not be possible this year, the president of Democratic Republic of Congo’s electoral commission said in a move that will violate a deal that let Kabila stay on past the end of his mandate.

Kabila’s refusal to step down at the end of his second elected term in December last year sparked protests that killed dozens of people.

“The parameters at our disposal give us, more or less, reason to think that, in December, it will probably not be possible to stick to that date,” commission president Corneille Nangaa said in an interview on France’s TV5Monde, referring to the year-end deadline.

Under the accord struck on December 31 between Kabila’s representatives and opposition leaders, Kabila, in power since 2001, is also barred from trying to change the constitution to stand for a third term.

However, Kabila has said only the electoral commission can schedule the vote once it finishes enrolling millions of voters.

In an interview last month with German newspaper Der Spiegel, he also said that he had “promised nothing” in the December deal.

The opposition quickly denounced Nangaa’s announcement on Sunday as a declaration of “war”.

Opposition leader Felix Tshisekedi wrote on Twitter that the commission president “had declared war on the Congolese people” and promised a full response by the country’s main opposition bloc on Monday.

Twenty-three years of armed conflict and inter-communal violence has taken a toll on this mineral-rich nation. People have been displaced by clashes, sometimes between the military and armed groups or between the rebels themselves.

An additional 1.3 million Congolese have fled the most recent violence in Kasai Province at the border with Angola. 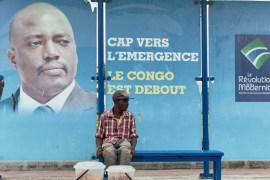