At least 23 people have been arrested during a march in the US state of Virginia by supporters of the white supremacist group, Ku Klux Klan.

A few dozen Klansmen protesting against the removal of a statue of Confederate General Robert E Lee in Charlottesville were met by hundreds of jeering counterprotesters on Saturday.

The two groups were separated by a metal barricade and a phalanx of armed police.

The Klan group shouted “white power” and brandished Confederate flags and signs with anti-Semitic messages. They marched past hundreds of people shouting “racists go home” and other chants.

State police threw tear gas containers to disperse the crowd and arrested two dozen people for failing to disperse as the rally ended.

The KKK rally was authorised on free speech grounds and lasted less than an hour.

City officials said about a 1,000 people were present at the march, of whom 50 were KKK members.

Confederacy statues and flags have been removed from public spaces across the US since 2015, after a white supremacist murdered nine black parishioners at a South Carolina church.

Critics of the monuments say they foster racism by celebrating leaders of the Confederacy in the pro-slavery South during the US Civil War.

Supporters say they represent an indelible part of US history and part of regional heritage.

Watching the rally in Charlottesville, Mason Pickett, a 60-ish retired businessman, said he regretted the city’s decision to remove the nearly century-old bronze statue of Lee and his horse.

“Statues can be good history, they can be bad history – you may not like it and you may love it, but it’s history,” he said.

But Tina Young, a 49-year-old lawyer, said it was past time to remove signs of the state’s Confederate past.

As to Lee, she added, “he did represent slavery, he did fight a war against our government which killed thousands and thousands of soldiers, he could have chosen the better side, but he didn’t.”

A legal battle is going on over the statue’s removal and no date has been set.

In its heyday in 1925, the KKK had as many as four million members.

These days it has from 5,000 to 8,000, mainly in the Deep South, according to the Southern Poverty Law Center, which monitors and studies extremism in the US. 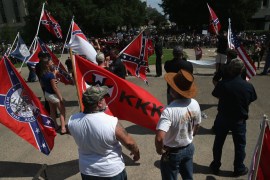 Arrests in Virginia made in a bid to intimidate anti-racist protesters, while far-right groups continue demonstrations.