A series of raging gun battles between two drug gangs left at least 14 people dead on Wednesday in the mountains of the northern Mexico state of Chihuahua.

Authorities said the number of dead could rise. Initial reports from the relatively isolated region had put the death toll as high as 26 but officials said later that only 14 bodies had been recovered.

Oscar Alberto Aparicio, the Chihuahua state security commissioner, said security forces came under fire when they arrived at the scene of the clash in Las Varas, a town about 300 kilometres northwest of the state capital.

Soldiers and police “were met with gunfire, but they managed to beat back the attack and only one patrol vehicle was hit by gunfire”, Aparicio said.

Aparicio said gunfights were continuing as police and soldiers chased gang members through the mountains. Authorities called in a Black Hawk helicopter to help in the search in the area, which is in a region known for cannabis and opium poppy production.

Felix Gonzalez, a spokesman for Chihuahua state prosecutors, told local media the initial confrontation pitted members the La Linea gang, based in the border city of Ciudad Juarez, against a faction of the Sinaloa cartel.

Another state prosecutors’ spokesman, Eduardo Esparza, confirmed 14 bodies had been found, but added that “there could be more”. He said all the dead were adult males. Twenty rifles were found at the scene, along with grenades and grenade launchers.

Gonzalez had initially reported 26 died, but later told Milenio television that the higher toll had mistakenly included some wounded.

Aparicio said the gangs had apparently killed two state police officers who went up into the area to investigate about 10 days ago.

“These criminals were the ones who killed in a cowardly way two of our agents a week ago,” Aparicio said, noting there were about 50 gunmen in one of the gangs.

It was the latest in a series of deadly clashes between police, rival drug gangs and warring factions within the Sinaloa cartel, which has been in turmoil since its kingpin, Joaquin “El Chapo” Guzman, was extradited to the US in January.

Last Friday, 19 gunmen were killed in a spectacular shoot-out with police on a highway in Sinaloa, the northwestern state that is the Guzman cartel’s home base.

OPINION: Fear and loathing on the border

Mexico is experiencing its highest homicide total in at least 20 years as splintered drug cartels battle over territory.

May was the deadliest month in Mexico since the government began keeping track in 1997, with 2,186 homicides.

The Sinaloa region is hotly disputed territory for Mexico’s drug cartels because its mountainous terrain and proximity to the border make it a strategic corridor for shipping drugs to the United States. 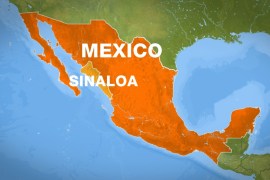 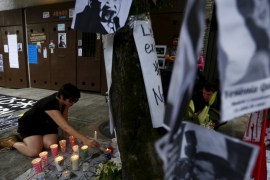