The death toll from an oil tanker explosion in central Pakistan has risen to 190, hospital and government officials said, as 16 more people succumbed to their injuries on Friday.

The oil tanker overturned on Sunday morning on a main highway from the coastal city of Karachi to Lahore while carrying around 40,000 litres of fuel.

It exploded minutes later as crowds from a nearby village gathered to scavenge for fuel, despite warnings by the driver as well as motorway police to stay away.

The charred wreckage of dozens of motorcycles and cars could be seen scattered on the highway, along with kitchen utensils, pots, water coolers, jerrycans and buckets which victims had brought to collect the petrol.

Local sources told Al Jazeera that most of the victims were residents of nearby areas who were collecting fuel from the spillage.

The tragedy marked a grim start to Eid, the celebrations closing the Muslim holy month of Ramadan.

Analysts said the reaction of the crowds is not surprising, given the problem of fuel shortages and poverty.

Children were among the dead and injured, according to Mohamed Ahmed, a hospital doctor.

People with severe burns were being sent to other cities because the hospital lacked facilities to treat so many patients at the same time, he said.

Rana Sanaullah, Punjab’s law minister, told the ARY news channel that DNA tests were being used to identify the dead.

He said the driver of the fuel tanker had survived the crash and been taken into custody.

Nawaz Sharif, Pakistan’s prime minister, expressed his grief at the accident and ordered authorities to make sure the victims were treated at the best medical facilities, his office said in a statement. 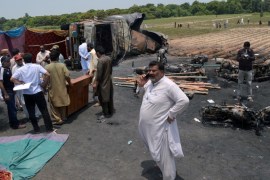 Scores die while collecting fuel from vehicle that overturned and exploded on road near Bahawalpur in eastern Pakistan. 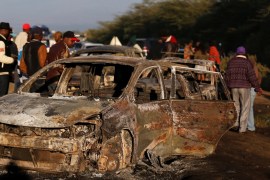