8:20pm: Iraq: Qatari ‘ransom’ money with us, not armed groups

4:55pm: US and Russia call for dialogue over Qatar-GCC dispute

4:35pm: Qatar hosted Taliban ‘at request of US government’

3:13pm: Inside Story – Blockade on Qatar ‘toying’ with people’s lives

10:21am – Iran Air says five planes of food have arrived to Qatar

7:25am – Qatar to hire international law firm to seek reparations for those hit from blockade

2:17am – Reported blocking of Qatari pilgrim at the Holy Mosque condemned

1:40am – Qatar will not expel nationals from countries that cut ties

1:10am – Qatari Foreign Minister: Hamas is a legitimate resistance group

4:13pm – Turkey: Qatar military base for the security of entire Gulf region

1:05pm – Qatari FM in Moscow for talks with Russian counterpart

11:33am – Saudi Arabia welcomes Trump’s remarks, does not respond to Tillerson call

6:58am – Merkel calls for regional cooperation

10:45pm – Rights committee present reports on effects of the blockade

10:15am – Five days on, five things to know about the Qatar-Gulf rift

5:30am – US senators push for strategy amid crisis

1:10am – Qatar urges citizens to take high-road on social media

6pm – Sudan says it will not take sides in Gulf rift

10:15am – UAE postal group suspends all services to Qatar

8am – France’s Macron calls all sides to ‘pursue dialogue’

2:30am – US talking to all sides involved in Gulf crisis

11:50pm – Kuwait’s Emir departs from Qatar after a brief visit

5pm – Emirati diplomat: ‘Nothing to negotiate’ with Qatar

11am – Moscow: No proof Russian hackers involved in Qatar crisis

9:50am – Etihad Airways: Qataris barred from travel/transit via UAE

8:30am – UAE bans show of sympathy towards Qatar

7:40am – Hamas ‘shocked’ by Saudi comments on Qatar

6:30am – Qataris banned from Qantas flights to Dubai

5:10am – Mauritanians protest in front of Qatar embassy

In a show of solidarity with Qatar, people in capital Nouakchott demonstrated outside the Qatari embassy against its government’s decision to severe ties with the Gulf state.

4:05am – Qatari ambassador to US discusses crisis

9:20am – Aluminium exports from Qatar blocked

8pm – US military has ‘no plans’ for change

11:05am – FlyDubai flights cancelled from Tuesday

10:20am – Emirates flights cancelled from Tuesday

8:35am – Etihad suspends flights from Tuesday

6am – Saudi cuts ties with Qatar

5:50am – Bahrain cuts ties with Qatar 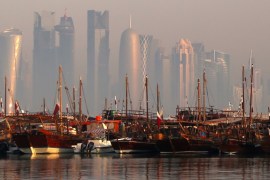 The latest news after some of the Gulf states and Egypt cut ties with Qatar and imposed a land, sea and air blockade. 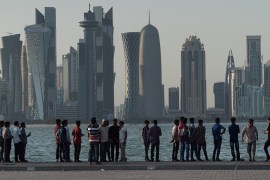 News updates after some of the Gulf states and Egypt cut ties with Qatar and imposed a land, sea and air blockade.