Rescuers have recovered 17 bodies of civilians believed to have been killed by fighters from the Islamic State of Iraq and the Levant (ISIL, also known as ISIS) group holed up in Marawi City, a besieged community in the southern Philippines, officials said.

“The recovered cadavers are believed to be those civilians who were helplessly murdered by the terrorists,” said Lieutenant Colonel Jo-ar Herrera, a spokesman for the task force battling the fighters in Marawi.

“This is a manifestation of the brutality [of those] who killed these innocent civilians in cold blood,” Herrera said.

Lieutenant Colonel Emmanuel Garcia of the Western Mindanao Command said in a text message to reporters that five bodies among the 17 were decapitated.

It was not clear when the bodies were found. A civilian rescue worker, Abdul Azis Lomondot, told Reuters news agency there were body parts found on Wednesday, but there was “no proof of beheadings”.

The retrieval brought to 44 the number of civilians allegedly killed by the fighters during the five-week conflict in Marawi City, military spokesperson Brigadier General Restituto Padilla said.

Padilla said it was likely that many civilians had been killed and the death toll was only what the authorities could confirm independently.

“There have been a significant number [of bodies] seen but again, we cannot include many of these,” he said.

Meanwhile, President Rodrigo Duterte said on Tuesday that he was prepared from the outset for a long fight against the fighters, who he said were “motivated only by murder and destruction”.

“It seems to be in limitless supply. They were able to stockpile their arms,” he said.

“Some of those who travelled to the Middle East got contaminated, brought the ideology back home and promised to declare war against humanity.”

The crisis in Marawi City, which began on May 23, has killed 71 security forces and 299 fighters. More than 300,000 people have been displaced from their homes. 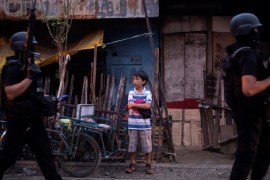 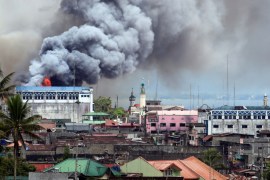 Scores of civilians killed in crossfire between army and ISIL-linked group in three weeks of fighting, politician says.