Suspected Boko Haram suicide bombers have struck the northeastern Nigerian city of Maiduguri, killing at least nine civilians, as the same armed group was also blamed for the death of eight soldiers in fierce fighting in neighbouring Chad.

The multiple attacks in Maiduguri also left 13 wounded, police told the Reuters news agency on Monday. They were the latest in a spate of attacks in the region.

No group has officially claimed responsibility for the blasts in Maiduguri, but the use of suicide bombers in the region is a hallmark of Boko Haram.

Borno police said a male suicide bomber killed a security guard after entering the University of Maiduguri, near the city centre at 21:20 GMT on Sunday.

Four female suicide bombers then killed eight people around an hour later on the outskirts of the city in Zannari community, after detonating devices in residential buildings.

Two female suicide bombers were the only people to die in two blasts at the University of Maiduguri on Monday morning at around 03:20 GMT.

“In all, 16 persons, including the suicide bombers, died in the multiple explosions while 13 persons were injured,” said the Borno Police commissioner, Damian Chukwu.

A number of suicide bomb attacks by suspected members of Boko Haram have taken place in the capital of Borno state and its neighbouring areas in the past few weeks, including blasts that killed 12 people on June 19 and a June 7 raid which left 14 dead.

On Friday, Nigeria’s state security agency also said it had foiled plans to detonate explosives in four northern cities – Maiduguri, Kano, Sokoto and Kaduna – during celebrations to mark the end of Islam’s holy month of Ramadan.

More than 20,000 people have been killed and more than two million have fled their homes since Boko Haram launched an armed campaign in 2009 to create an Islamic state in northeast Nigeria.

Nigeria’s army, with the help of troops from neighbouring countries, pushed the group out of most of a swath of land around the size of Belgium which it controlled until early 2015.

But suicide bombings and gun raids in mostly busy public areas such as mosques and markets have continued in northeast Nigeria and neighbouring Cameroon and Niger.

The frequency of suicide bombings has increased in the past few weeks, although a large proportion of the attacks result in only the bombers being killed.

In neighbouring Chad, eight soldiers were killed when suspected Boko Haram fighters launched an attack over the weekend on islands on Lake Chad, the army told the Associated Press news agency on Monday.

“Our forces attacked Boko Haram elements on five islands near Nigeria on June 24 and 25,” said Chad army spokesman Colonel Azem, indicating eight soldiers had died and another 18 were wounded.

He also said troops had killed 162 fighters and destroyed six vehicles along with many of the motorcycles often favoured by the group in their raids.

The claim of the military could not be independently verified.

Lake Chad  borders four countries on the edge of the Sahara: Chad, Cameroon, Niger and Nigeria.

On Sunday, Chad’s President Idriss Deby threatened to pull the country’s troops out of peacekeeping operations in Africa because of a lack of foreign financial support.

Chad has contributed 1,390 soldiers, the third-largest contingent to MINUSMA, the UN peacekeeping mission deployed in Mali in response to violence. 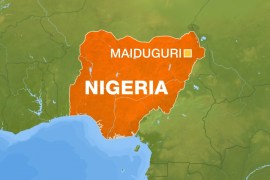 Attacks in Maiduguri city occurred while soldiers were trying to repel another group of Boko Haram fighters. 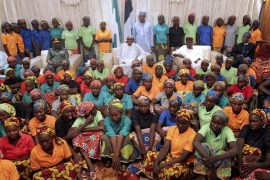