Iran’s Revolutionary Guard says it has fired several missiles at ISIL positions in Syria’s Deir Az Zor province in retaliation for two deadly attacks in Tehran earlier this month that were claimed by the armed group.

“Medium-range missiles were fired from the [western] provinces of Kermanshah and Kurdestan, and a large number of terrorists were killed and weapons destroyed,” the Guard said in a statement published on its Sepahnews website on Sunday.

It said the attack targeted “a command base .. of the terrorists in Deir Ezzor”, using a different version of the name for the province in eastern Syria.

“The spilling of any pure blood will not go unanswered,” it added.

Iranian television showed footage of the missiles being launched into the night sky.

The firing of the missiles, the first in 30 years outside Iran’s own territory, came hours after Supreme Leader Ayatollah Ali Khamenei, in a statement on his website, vowed Iran would “slap its enemies” in honour of the victims’ families, including those killed in Syria and Iraq.

Deir Az Zor is an oil-rich province that links ISIL’s de facto capital, the Syrian city of Raqqa, with territory controlled by the group in neighbouring Iraq.

Al Jazeera’s Stefanie Dekker, reporting from Gaziantep, near the Syria-Turkey border, called the firing of the missiles a “hugely significant and major development”.

Another footage of the moment when #Iran's IRGC fires missiles targeting terrorists in #DeirEzzor of #Syria.#IRGC pic.twitter.com/MHfEpO05yx

“We need to see this in two folds – one in the context of the war in Syria: Iran has been providing advisers, fighters, volunteers, militias, weapons and money, but it has never targeted the country with this kind of strike,” she said.

“And, of course, we need to see this in the wider geopolitical context: it will be very interesting what the reaction is going to be from countries such as Saudi Arabia, the United States and Israel, because Iran is saying it can retaliate, and it will.”

ISIL, which stands for Islamic State of Iraq and the Levant, and is also known as ISIS, claimed responsibility for the June 7 attacks on Iran’s parliament and the Mausoleum of Ayatollah Khomeini that left 17 people dead.

The attack on Khomeini’s shrine was symbolically stunning. As Iran’s first supreme leader, Khomeini is a towering figure in the country and was its revolutionary leader in the 1979 removal of the shah.

Senior Iranian officials had also put the blame for the Tehran attacks on Riyadh, saying Saudi Arabia was “promoting terrorist groups” in Iran.

Iran is a key ally of the Syrian government of President Bashar al-Assad, alongside Russia and the Iranian-backed Hezbollah movement of Lebanon.

In March, an official was quoted by Iran’s IRNA news agency as saying that about 2,100 combatants sent by Iran have been killed in Syria and Iraq. 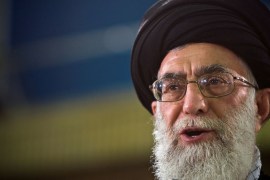 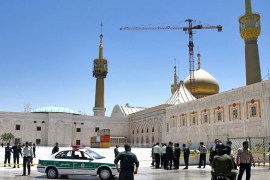