A coalition of former ethnic Albanian rebel commanders has won the most votes in Kosovo’s general election but lacks an outright majority to form a government.

The alliance, dubbed the “war wing” by Kosovo’s media and led by the Democratic Party of Kosovo (PDK) of President Hashim Thaci, won 35.78 percent of votes, based on a count of nearly 70 percent of ballots.

Ramush Haradinaj, whom the leading coalition has nominated to be prime minister, hailed Kosovars “for the trust given to the coalition”, adding “these are the best elections ever held” in Kosovo.

“The victory is convincing and makes us capable of operating further to create the country’s government,” he said.

But the nationalist left-wing Vetevendosje (Self-Determination) party appeared to roughly double its support since the last election, bagging 26.6 percent of votes after pledging to take on rampant corruption.

Vetevendosje leader Albin Kurti hailed the result as a “huge victory” as he addressed his followers.

He said the party, which is known for its radical methods in opposition such as hurling tear gas in parliament, had “more victories ahead”.

The coalition led by former ruling Democratic League of Kosovo, LDK, came in third with 25.3 percent of the vote.

READ MORE: Roma in Kosovo – The justice that never came

Supporters of the leading coalition and Vetevendosje took to the streets to celebrate in central Pristina.

The snap parliamentary election, which took place on Sunday, was called after 78 MPs out of 120 backed a vote of no confidence against the administration.

This is Kosovo’s third legislative election since it declared independence from Serbia in 2008.

The opposition has been demanding elections for two years, primarily due to controversial agreements that the government signed in Brussels in 2015 regarding the border demarcation with Montenegro, and on establishing an autonomous association of Serb-majority municipalities.

Most of Kosovo’s 1.8 million people are ethnic Albanian.

The country’s Serb minority also automatically gets 10 representatives in the assembly, but the full distribution of seats would not be clear until Monday or later in the week.

The country, where half of the population is under the age of 30, has been beset with economic problems and political corruption.

The unemployment rate is 27.5 percent, and many young people leave Kosovo in search of a better life.

According to the Slovenia-based International Institute for Middle East and Balkan Studies, Kosovo’s political elites are “characterised by crime, corruption and nepotism”.

Overshadowing the vote is a new special court set up to try war crimes allegedly committed by members of the pro-independence Kosovo Liberation Army (KLA), which fought Serbian forces in the late 1990s. 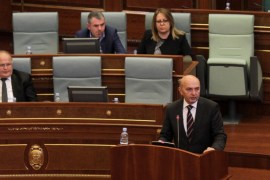 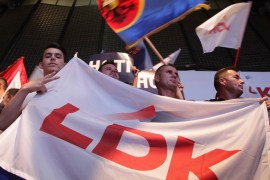 The new government will have to tackle unemployment running at 30 percent and improve relations with its neighbours.