Kuwait on Sunday said that Qatar is willing to hold a dialogue with the Gulf Arab countries that cut ties with it and was ready to listen to their concerns, in the latest twist of a major diplomatic rift.

Kuwait has led a mediation effort to defuse an escalating crisis after Saudi Arabia, the United Arab Emirates (UAE) and Bahrain, along with Egypt and a group of smaller countries, severed relations with Qatar on Monday, accusing it of supporting “terrorism” – allegations Doha denies.

The three Gulf states also imposed a land, sea and air blockade, and ordered all Qataris out within 14 days, while calling their own citizens back.

“[Kuwait] affirms the readiness of the brothers in Qatar to understand the reality of the qualms and concerns of their brothers and to heed the noble endeavours to enhance security and stability,” Kuwait’s state-run KUNA news agency quoted Foreign Minister Sheikh Sabah al-Khalid al-Sabah as saying on Sunday.

“Kuwait stresses the inevitability of solving this disagreement within the Gulf framework,” he added.

Al Jazeera’s Ibrahim Mohamed, reporting from Kuwait City, said that the Kuwaiti foreign minister also stressed that his country “will continue to mediate with the aim of mending fences and to address the root causes of the differences”.

Qatar has condemned the boycott declared by its neighbours as “collective punishment”, as hundreds of mixed-citizenship couples with one Qatari spouse are facing the grim prospect of being split up.

Amnesty International also criticised the blockade being imposed on Qatar, saying it is “splitting up families and destroying people’s’ livelihoods and education”.

“For potentially thousands of people across the Gulf, the effect of the steps imposed in the wake of this political dispute is suffering, heartbreak and fear,” James Lynch, Deputy Director of Amnesty International’s Global Issues Programme, said in a statement.

READ MORE: The five most bizarre decisions in Gulf-Qatar crisis

In a sign that they may allow some Qataris to stay in their countries, Saudi Arabia, the UAE and Bahrain issued statements urging mixed nationality families to call their respective interior ministries, which would take into consideration the “humanitarian circumstances” of their situation.

Affected families were urged to call hotlines set up by authorities in the three countries to get assistance, the statements added without giving details.

For its part, Qatar issued an overnight statement saying residents living in the country from the three nations would have “complete freedom” to stay despite the “hostile and tendentious campaigns” now targeting it.

“The state of Qatar, in accordance to its firm beliefs and principles, works on avoiding political conflicts with states and governments when dealing with their people,” is said.

“Those residents have the complete freedom in staying in the state of Qatar in accordance with the laws and regulations adopted by the state.”

The decision will come as a relief to the more than 11,000 people from Saudi Arabia, the United Arab Emirates and Bahrain living in Qatar.

Qatari Foreign Minister Mohammed bin Abdulrahman Al Thani has repeatedly said the blockade of his country is in violation of international law.

“Such measures have never been exercised before enemy states, let alone a friendly and a sister state in the Gulf Cooperation Council,” he said on a recent trip to Germany. 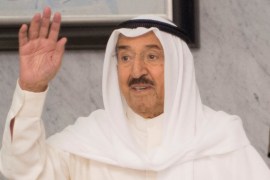 Sheikh Sabah leaves Doha as part of his mediation mission that also took him to Saudi Arabia and UAE.