At least 25 people were killed and several others injured in an explosion at a fireworks factory in the central Indian state of Madhya Pradesh, police said on Thursday.

The blast occurred on Wednesday afternoon when a blaze engulfed the factory in Balaghat district.

Dozens of workers managed to escape unhurt as firefighters brought the fire under control in two hours.

“The blast was so powerful that its sound could be heard five kilometres from the site,” Balaghat Police Chief Amit Sanghi said.

Another five were being treated for burns and smoke inhalation, while the condition of two was critical.

Police said the cause of the blast was not immediately known and was being investigated.

However, it was most likely triggered by a worker who may have callously tossed a lit cigarette butt in the premises.

“The rescue operation is over now. We have cleared the place and thankfully no one is trapped inside,” local administrative chief Bharat Yadav told the AFP news agency from the site of the blast.

Police have lodged a criminal case against the factory owner.

Shivraj Singh Chauhan, chief minister of Madhya Pradesh, announced compensation of about $3,000 for the families of the deceased.

India has a huge demand for firecrackers, which are used in religious festivals and weddings.

Workplace accidents are common in Indian fireworks factories, where inadequate safety standards and lax enforcement of regulations have led to horrific deaths.

Local media reported that at least 11 people were killed in similar accidents in Madhya Pradesh in April. 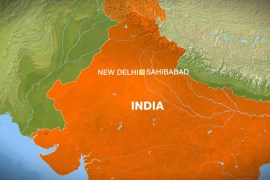 Deaths of 13 people in Sahibabad, outside Delhi, seen as latest evidence of country’s poor workplace-safety record.